Seung-Hee: Sketches on the Sky 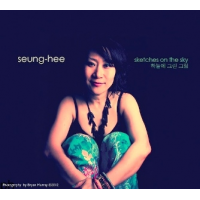 Brooklyn-based jazz vocalist Seung-Hee possesses the composure of a seasoned chanteuse while demonstrating broader qualities that contain refined arranging skills, classical training, and multilingual singing. The South Korean native represents a soulfully empathetic performer and a composer who's not afraid to take chances as witnessed in Sketches on the Sky, the follow up to 2009's memorable self-produced debut, Waiting.

With a top-notch band that includes the brown-toned reeds of Adam Kolker and rising pianist Frank LoCrasto, Seung-Hee offers an eclectic mix with new material and unique covers such as Charlie Haden's "Bohm So Ri" now colored with Korean lyrics. "Sketch Part I" begins the set with a chamber-esque theme that switches tempos and lifts to the skies with unison voice/instrumental acrobatics, and jubilant swinging solos held in check by bassist Ike Sturm and drummer George Schuller. It's followed by "I'll Be Here" where Seung-Hee's lyrics exude bittersweet longing and graceful symmetry with Sturm's affecting arco.

Seung-Hee's fearlessness is displayed in the unique versioning of Stevie Wonder's "Vision" or when tackling the Edu Lobo Brazilian classic "Pra Dizer Adeus." She not only balances different languages but also the ability to use her voice as an expressive instrument that rivals Kolker's tenor flights in Bill Evans's "An Elliptical Note." Her artistry and passion for music is infectious throughout the set, culminating with the charming children's song "By the Sea."

Sketch Part I; I'll Be Here; Winter and Then; Bohm So Ri; Sketch Part II; Pra Dizer Adeus;Visions; An elliptical note; Valparaiso; By the Sea.