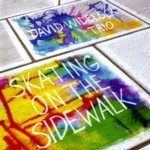 Skating on the Sidewalk is a record where myriad disparate musically idiomatic journeys collide with dash and splash on the concrete of urban modernity. It is a musical journey that begins from so many directions —the spare blue sogginess of the Delta, multi-hued blue New Orleans, and blue and windy Chicago. There is also a trip and a sustained whirl in swinging New York and even the mysterious saudades of Brazil. All of this lands sliding, thumping, and grinding on the cool of West Coast sidewalks. Literally and figuratively. This record, which features a coming together of a trio of minds—guitarist, David Widelock, bassist, Fred Randolph, and percussionist, Jim Kassis—is a strong reminder that there is no such thing as "straight ahead" and that "twisted" is good when color meets echoes of interesting tonal variation.

The captain of the ship is Widelock, a truly accomplished guitarist who really puts the strings to the test—no matter how many his electric or acoustic guitars can hold. He hears music not so much as clusters of notes but as tonal organizations. Moreover, he is unafraid to ascribe kaleidoscopic thoughts and ideas to the music he writes. He is puckish and playful and sometimes can tear up the frets with seemingly discordant sounds from following a harmolodic scheme for a song. Widelock can also be spare, almost deceptively simplistic, yet profound, at the same time.

On "Chitchat," he is both of the above. The dancing and leaping melodic line adds the element of intrigue to the song and breaks up the vamp. Widelock also enriches the harmony of Leadbelly rarely heard gem, "Black Betty" with a gentle swing and open, bell-like electric sound. Randolph's imaginative solo is replete with singularly ingenious and crisply annunciated notes. The counterpoint is poignant. "A Colorful Dream Underwater" is moody and meandering. Both Randolph and percussionist, Kassis—who unravels a masterful rhythmic palette of sounds here—keep the swing to a gentle canter. Tom Waits "Sixteen Shells from a 30-06" has a sinister vamp with the low and deep bass. Its blusey harmonics send the song spiralling into a giddying tailspin.

"Skating on the Sidewalk" has a refreshing Latin rhythm and is as much a vehicle for the and restrained Bossa Nova accents that Kassis splashes around his cymbals as it is for Widelock to unveil his acoustic skills as Randolph does with the electric bass. "Cellodious" brings a Thelonious Monk-like spirit to the party. "Stay on Message" is like a slowly unwinding homily varying in tone from the major to minor as it explores fresh ways to keep the harmonics alive. "The Central Plain" is a classic vehicle for the 12-string guitar and shows why Widelock was held in such high esteem by the great Brazilian guitarist, Luiz Bonfa

This record has so many delightful twists and turns, all of which make it a mindbending urban musical excursion.