By DOUG COLLETTE
January 16, 2019
Sign in to view read count 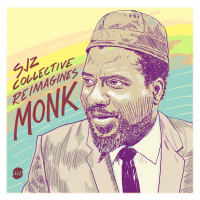 Until a saucy swagger kicks in on the fourth and final track, "Blue Monk," it's difficult if not impossible to recognize this music as a tribute to the late Thelonious Monk And that's perfectly appropriate—no similarly-conceived homage should be overly familiar. But it is also a tribute to the ingenuity of the SJZ Collective, and the prominence of Brian Ho's organ, which is crucial to this record's distinction.

Yet, as with that concluding cut, and the opener, "Green Chimneys" (a somewhat lesser-known composition of the jazz icon's), there's near total absence of piano, Monk's main axe. But that's also true for the better part of the record too, which is perfectly apropos on its own terms—who could or would try to even echo, much less outright replicate the man's idiosyncrasies?

The title of this interpretive collaboration needs to be include the word "re-imagining."' For the purposes of this recording, the SJZ Collective (conceived as an ever-evolving mix of players) here is a sextet within which individual members proffer their own arrangements of material by the late pianist and composer. And while the musicians do spotlight their respective instruments, as guitarist Hristo Vitchev does (at least initially) on "Round Midnight," every member of the band gets to chip in ideas and embroider upon the others, a conversational interaction that happens repeatedly during the near-sixteen minute performance of that signature tune.

As elsewhere here, fans of the respective players can whet their appetites for more as they feast on the solos. And in addition to the quality of the musicianship, the EP's streamlined sonics portray Saul Sierra's bass textures as accurately as those of John L. Worley's trumpet and SJZ Collective bandleader Wally Schnalle's drums. Saxophonist Oscar Pangilinan also devises seductive charts for "Ask Me Now" that stand out in sharp relief from the lively likes of the aforementioned closer with which it's juxtaposed: that track sequencing furthers the equilibrium of the recording. But this equitable dynamic balance also arises from the comparable duration of the two cuts.

And speaking of playing time, the only thing ostensibly 'wrong' with SJZ Reimagines Monk is that it is, in fact, too short for it's own good or, rather, for how good it is all around. This "extended play" does run approximately forty minutes—once standard duration for a full-length LP in the original hey day of the vinyl configuration—and here becomes both refreshing and compelling to hear because that time span passes, seemingly, in a flash.