By DAN MCCLENAGHAN
March 11, 2016
Sign in to view read count 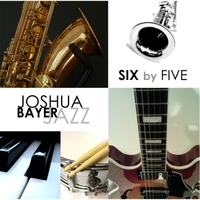 Joshua Bayer can't be called a prolific artist in terms of CD releases. The bassist/guitarist has offered up only two previous albums this millennium: Lines and Grooves (Jazzhead Records, 2003) and New Voice: Old Voice (Self Produced, 2006). Both sets grooved nicely, lively mainstream quartet sets, with a saxophone out front riding the waves of surging rhythm sections—piano-centric on Lines and Grooves, then cranking it up a notch on New Voice: Old Voice by bringing in the Fender Rhodes.

Bayer's third set of the new century, Six By Five ups the ante on the high energy bets by going the organ trio route, plus two—a couple of searing saxophones in front of guitar/organ/drums. Bayer switches from bass. He's the guitarist now.

Organ jazz, from Jimmy Smith to Larry Young to Dr. Lonnie Smith, is known for its soulful urban sounds, often described as "gritty" of "greasy." Bayer's approach would have to be categorized as straight ahead propulsive, bursting with infectious grooves. The organ, in the hands of Todd Simon, is like a jet turbine on cruise control, laying down a cool cushion for the saxophonist Paul Carr and Peter Fraize. And when the organist gets his solo, the turbine cuts loose with articulate, tasty statements, with guitarist Bayer slicing in with sharp, tangy notes, while drummer Harold Summey kicks the groove along with the accelerator on the floor.

Bayer sets the sound apart from the normal organ jazz sets via his use of two saxophonists, and also the pairing, on each tune, of soprano and tenor, with Fraize and Carr alternating, crafting some rich and unusual harmonies.

It's a set of fine Bayer originals, without a moment of reverie or rumination. These guys go for the groove, and ride it hard.

Arc 2; Six By Five; Not A Single Note; So Far; Sweet G; Three Layers Of Players.