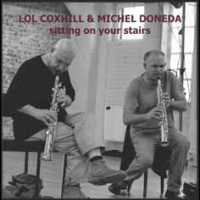 In July 2012, London-based saxophonist Lol Coxhill died, aged 79, after a prolonged period of illness in a hospital. A favorite with London audiences for decades, in the months following his death Coxhill was fondly celebrated and remembered by the city's extensive improvised music community. Now, Sitting on Your Stairs is the first album of Coxhill's music released posthumously. It was recorded on February 3rd 2011 at Les Instants Chavirés at Montreuil, Paris, and documents Coxhill's last ever concert in France. The day before, he had played there in a trio, with bassist John Edwards and drummer Steve Noble, but on the day in question he played in a duo with fellow soprano saxophonist Michel Doneda.

That is good news, as Coxhill and Doneda each had form when it came to playing with other soprano saxophones—such as Coxhill with Steve Lacy and Evan Parker on the wonderful Three Blokes (FMP, 1992), and Doneda matched with Alessandro Bosetti and Bhob Rainey on Placés dans L'air (Potlatch, 2003). By 2011, Coxhill and Doneda had been playing together as a duo for several years, long enough for them to be comfortable together. The two had radically different styles which contrasted and combined well, together forming a whole far greater than the sum of its parts. That is particularly well demonstrated on this recording which opens with a prolonged duo piece before featuring solo performances from each of them, followed by three further duo pieces. The solo tracks lay bare the differences between them—Doneda being more prone to exploring and experimenting with breathing and sound, while Coxhill leant more towards coherent melodic phrases usually of his own invention but with occasional quotations.

The combined effect of hearing Coxhill and Doneda intertwine with each other can be strongly reminiscent of listening to a dawn chorus in which two contrasting birds trade their individual phrases which gradually blend harmoniously into one entity, even though neither of them has obviously altered its song to accommodate the other. Yes, this saxophone duo sounds like a natural phenomenon. Dear Lol—so sadly missed.