By KARL ACKERMANN
February 7, 2016
Sign in to view read count 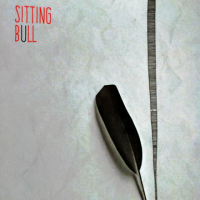 The piano and percussion duo may be two-thirds of that most ubiquitous trio formation, but it is not often heard. Among those who have tackled this duo format are former Yes members, keyboardist Patrick Moraz and drummer Bill Bruford—both with solid jazz credentials—who had been down this road more than twenty years back with two E.G. Records releases, Flags and Music for Piano and Drums (1983, 1985) but with multiple keys and percussion instruments, their efforts were technologically embellished. Pianist Irène Schweizer has recorded duos with a number of drummers including Han Bennink, Louis Moholo-Moholo, and Andrew Cyrille. And, of course, Max Roach and Cecil Taylor captured their 1979 Columbia University performances on Historic Concerts (Soul Note, 1980). A new release, Sitting Bull, with Italian pianist Federico Pozzer and drummer Aleksandar Škorić stands out in its diversity and approach to this setting.

Pozzer had studied classical piano from childhood and into his time at the Conservatory of Vicenza. It may not be coincidental that his thesis was on the celebrated Ukrainian pianist, Misha Mengelberg who had also recorded with Bennink. Serbia born Škorić and Pozzer met in Holland in 2013 when both were attending the Conservatory "Prins Claus" in Groningen. The two had recorded as part of a self-titled quintet, Falga (Cantina, 2015). Their synergy—and diverse musical interests—make Sitting Bull an intriguing and unusual album.

There are twelve pieces on the album, with nine of them being improvised, one ("Pigeons") composed by Pozzer and covers of Thelonius Monk and John Coltrane. Three of the pieces clock in around one-minute each; more sonic ideas than fully executed concepts. The opening "Hoka Psice" features dramatic washes of cymbals along with bells and rattles and what may be Pozzer tinkering with the inner workings of the piano. "Dakota" has Pozzer dropping in chords, then letting the silence settle in between. Monk's "Criss Cross" is somewhat true to the original albeit, a harder, more spikey interpretation. An odd—and unintentionally humorous—fire and brimstone preacher is the backdrop for "What is Your Life (Part 2)"; the speaker's high drama blending perfectly with the frenzied improvisations of Pozzer and Škorić. The last half of Coltrane's "Sun Ship" is given to an amazing and exhausting Škorić solo.

There's not a lot of down time on Sitting Bull though "Crowded" and "Pigeons" are quietly melodic breaks in the hyper-complexity that pervades throughout this album. Despite the free nature of the music, there's a clear and consistent vision; Pozzer and Škorić finding an intuitive empathy as they trade-off between complementing each other and playing in near-seclusion. This album is as good as it is different and well worth the listening time.

About Federico Pozzer and Aleksandar Škorić