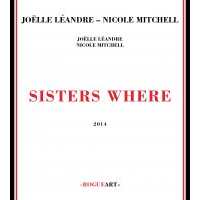 Sisters Where forms another installment in the fertile collaboration between French bassist Joëlle Léandre and American flutist Nicole Mitchell, following on from Before After (Rogue Art, 2011) and Flowing Stream (Leo Records, 2014). One enduring feature of the pairing is the attractive opposition of high and low ends represented by their respective axes, although of course Léandre can effortlessly traverse that divide with her virtuosic bow handling. What further helps make the session work so well is that each includes a healthy dose of lyricism in their discourse, alongside more extended techniques. But it is their sense of improvisatory fun which undercuts what might occasionally pass as a demure classical recital.

Both are consummate performers, and it's a given that anything they are involved in will achieve high standards. Renowned for her unique synthesis of flute and voice, which she blends so they are near impossible to disentangle, Mitchell almost transcends her instrument. For her part Léandre mixes drive and ceaseless variation with a deep resonance, while her vocals add a further layer of possibility, without ever veering into overbearing theatricality. In tandem they create a winning combination, whether through unity in converging phrases, or separation via freewheeling counterpoint, like a pas de deux in contemporary dance.

ADVERTISEMENT
The 42-minute program comprises six joint inventions captured live in Paris in early 2013. On "Sisters on Venus" passages of delicately intertwining flute multiphonics and arco overtones confirm the twosome's appeal. Other highlights include the dashing bowing matched by spiralling outpouring of flute melody, like a lark ascending on "Sisters on Uranus," while for "Sisters on Mercury" Mitchell alternates between flute and squeaky voice, with trills and plosives, which prompts Léandre to switch to a staccato attack. On the same cut, the American astounds by drawing two simultaneous tones from her flute.

Later during the atmospheric "Sisters on Saturn," they craft a soaring edifice from a drone punctuated by short energetic flurries, eliciting deservedly enthusiastic applause from the audience at the close. It presages a brief encore—"Sisters on Earth"—in which singing lines deconstruct into croaks and whispers before eventual silence. The only downside to a compelling set comes in a somewhat cavernous sound which results in a loss of clarity and detail, particularly on the flute.