By GLENN ASTARITA
February 13, 2014
Sign in to view read count 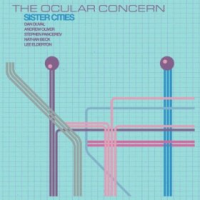 Sister Cities is entrancingly concocted by this Portland, OR. band led by keyboardist Andrew Oliver and guitarist Dan Duval. The primary focal point is the five-part "Sister Cities Suite," abetted by a three-piece strings section, where the musicians frame the inspiring factors of a globalized 21st century, somehow affiliated with, or corresponding to the names of Portland's sister cities on a worldwide basis. Regardless, the album hovers very close to masterpiece-like proportions. There is no filler material as the program seizes your attention from start to finish.

The "Sister Cities Suite" is a harmonious synthesis of jazz, Middle-Eastern undertones and progressive rock modalities, snugly wrapped into an interconnected group-centric sound. Burgeoning with sinuously integrated dynamics, the strings section enlarges the acoustic-electric soundscape, along with the tango element tendered by bandoneon performer Alex Krebbs. Moreover, the ensemble's flair for morphing tuneful riffs and choruses into the big picture is simply an added bonus, as the strings section frequently assimilates with the core unit in symbiotic fashion. The suite is also dappled with colorific and judiciously enacted electronics effects. Here, the musicians render odd-metered detours, hummable ostinato motifs and a recurring inference to Frank Zappa via a blithe and tricky unison vamp, radiating into a reverse-engineered hook.

Among other positive facets, Duval and Oliver shine as gifted composers, possessing deep insights into various genres and styles. And even though it's early in the year, Sister Cities should conceivably find its way on a multitude of best-of lists for 2014, depending on widespread exposure and perhaps some recurring airplay on the appropriate college and satellite stations.