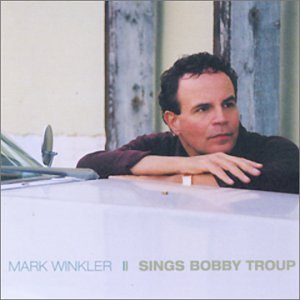 While the tie between jazz and show tunes might be Tin Pan Alley in New York, the West Coast has been the inspiration for hipster song craftsmen. Singer Mark Winkler has made a recording of the quintessential Los Angeles composer Bobby Troup’s music, reviving much of the 1950s and '60s charm.

Like Diana Krall’s All Of You tribute to Nat King Cole, Winkler’s Sings Bobby Troup opens a capsule to a time when outward expressions of hipness fit hand-in-glove with splashes of jazz. Winkler joins singers like Krall, Mark Murphy, Kurt Elling, Mose Allison, and the great Dave Frishberg who are still waxing the poetic side of life. His ‘discovery’ of Troup’s music reminds us that Troup wrote the classic tunes “Route 66,” “You’re Looking At Me,” and “Baby, Baby All The Time.” These compositions, now in the great American songbook, belong to all of us and are part of our popular cultural experience.

Winkler’s background as a songwriter for Dianne Reeves, Nancy Wilson, and Liza Minelli manifest itself in his theatrical delivery. His hip is the pop-meets-Broadway kind. Perfect to enunciate the sometime cat-chasing-its-tail lyrics of Troup. Whether he is espousing the health benefits of a cocktail’s “Lemon Twist” or telling the hipster version of the “Three Bears,” Winkler remains in character. Sure, these tunes may set off your political correctness alert, but I’m sure they were meant to do the same thirty years ago when Tony Bennett covered “Girl Talk.” When he wasn’t writing the quirky, Troup wrote some beautiful show tune lyrics—and Winkler covers these nicely.