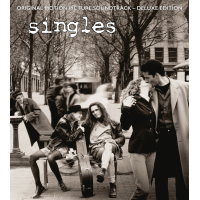 Close on the heels of Pearl Jam's explosive induction into the Rock and Roll Hall of Fame, it's obviously no coincidence an expanded twenty-fifth anniversary edition appears of the soundtrack to Singles, the (third) film by Cameron Crowe, focused on the ascendant grunge scene of the early 1990s in Seattle.

Available in super deluxe format of two LP's and a bonus CD-actually the second of two discs in the expanded form of that medium-the new edition contains the original thirteen tracks and eighteen more, a plethora of content that simultaneously illustrates the transience and endurance of musical and technological movements. After all, the ominous air of Alice in Chains' "Would?" isn't all that far removed from the shadow of doom conjured up by The Jesus and Mary Chain or before them, Joy division (or the Doors at an even earlier point in time).

The same goes for the acoustic likes of Chris Cornell's "Seasons," recalling as it does the unplugged Black Sabbath a la their third album Master of Reality (Warner Bros., 1971). As much as a new paradigm like grunge may reject the past, it's invariably built on it, but in contrast to the rejection of prog and classic rock dinosaurs by the Sex Pistols, the Clash, et. al., the Washington state scene built upon the foundation(s) of what preceded it in order to give expression to its own novel sentiments of the time and, in an overt and distinct shift in attitude from punk, honored the likes of Neil Young as heroes.

Which is why the hard rock of as on "Breath" and "State of Love and Trust," by Pearl Jam (who recorded Mirror Ball (Reprise/Epic Records) with the aforementioned Canadian and toured with him as well), is replete with brutally honest emotion bracing as its muscular musicianship, hasn't dated in the interim of a quarter century since the movie Singles or the music of its time that it in turn inspired and reflected. None of these artists, be it Mudhoney ("Overblown"), Soundgarden ("Birth Ritual") or the somewhat unsung heroes of grunge Screaming Trees ("Nearly Lost You"), can prevent this soundtrack from morphing into a greatest hits' of a sort, and, especially in its vinyl form, a dilettantish means to dabble in a formidable and not-so-long ago period of rock history .

In the whirlwind context of all these superficially paradoxical culture shifts, how fortunate is it the main composer of the Replacements, Paul Westerberg, continued to write and record after his now hallowed band dissolved. The humor and healthy sense of detachment at the core of his songs like "Dyslexic Heart" and "Waiting for Somebody" are the proverbial breath of fresh air, particularly as it resides right next to The Lovemongers' rendition of Led Zeppelin's "Battle of Evermore" (Ann and Nancy Wilson of Heart's homage to the British blues-rockers) and Mother Love Bone's only slightly less precious "Chloe Dancer"/"Crown of Thorns," all of which, in this context much a reflection of the West Coast city itself, in all its varied glory, as a musical movement..

Accordingly, the Jimi Hendrix Experience appears here in the form of the "May This Be Love," not exactly the type of understated rapture that epitomizes the late guitar hero and Seattle native, but one that is of a piece with similarly psychedelicized atmospherics of "Drown" by Smashing Pumpkins; the staggered sequencing of the two cuts is maintenance of the pacing within the original baker's dozen numbers and makes for a weighty impact at its climax as much as its logical conclusion. And there's a notable dollop of tongue-in-cheek self-awareness injected by the fictional band's "Touch Me, I'm Dick," ghost-played by Eddie Vedder and co.

Similarly, the eighteen tracks comprising the bonus disc reaffirms the impressions implanted by of the original selection but also validates its own collectability by the inclusion of seven previously unreleased tracks, notable among which are Pearl Jammer Mike McCready's quasi-chaingang instrumental "Single Blues 1"Acoustic instrumental variations on the aforementioned Westerberg cuts are also here, plus two others of his (Blue Heart" and "Lost in Emily's Woods") which reside next to the ever-so-rare likes of Truly's "Heart and Lungs," and "Six Foot Under" by Blood Circus, both of which were last minute deletions from the soundtrack as originally issued (some two months prior to the film itself)

Together with the entirety of the Poncier (Real Clever, 1992) EP by the late Chris Cornell, as well as the thunderous, heavy metallic echoes of live tracks from Alice in Chains and Soundgarden, the thirty-one tracks in total deeply echo with a voice simultaneously distinctive and familiar that maintains its resonance to a greater or lesser degree, in all its different permutations. Likewise, the palpably staged quality radiating from the photos adorning this 'Deluxe Edition' of Singles, emphasize how the slightly-oversized (5.5" x 6") dimensions of the package represent an oh-so accurate metaphor at once capturing the dislocation of the film's cast of characters and the community that arose from the scene they inhabited.