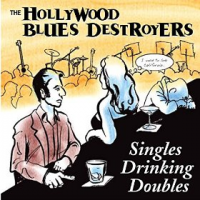 Avoid the intended seduction of the sexy and dangerous collective called The Hollywood Blues Destroyers for the Oz behind the curtain with his merry band of friends is one Fred Steven "Skip" Heller. AllMusic's Jana Pendragon calls Heller, "America's most confusing country singer." Whatever Heller might be, he is a defender of American Music...all of it. For Heller, music is mot the disposable commodity it has become since 2000. It remains that spiritual idea given life by those special people we call musicians. Heller's intellectual reach is evidenced in his All About Jazz column "Hardly Strictly Jazz." Heller has been dodging being stylistically pigeon-holed for his entire career.

For the past number of years, Heller has been circling Americana. His focus was refined during a period where the guitarist took a musical road trip through this same Americana. In Heller's creative mind, he has the luxury 360-degree vision with respect to time. He draws heavily from the past while looking ahead and never losing sight of what is to either side of him.

The present recording, Singles Drinking Doubles follows the recent releases of two breakthrough recordings featuring Heller on vocals as well as guitar. Heller's voice is an enigma. It is comfortable, familiar, lived in. It reminds me of the singing voices of so many Broadway lyricists, something that is honest and genuine. Likewise are the themes Heller address in his songs. Heller's writing is for adults, not in the sense that his topics are prurient, but that they speak to middle age and the wisdom gained or not.

The Hollywood Blues Destroyers sport a horn section with all parts and arrangements penned by Heller. The horn section adds a certain completeness to the band. Absent from the band are keyboards which give the Destroyers a wholly authentic sound. Heller takes advantage of this larger ensemble to reprise several compositions released on earlier recordings. The disc opens with "At My Age," which Heller first recorded for The Long Way Home (Ropeadop, 2009). Here, the song gets a full-bodied treatment that adds momentum to Heller's shuffling rhythm giving it a piquant punch.

Heller reconsiders "Fools Like Me," originally included on his 2011 Foolish Me (Weatherbird). Also from Foolish Me is the exceptional LA song, "Let's Stay Home." Heller establishes a languid Southern California soundscape (reminiscent of The Classics IV's "Stormy") with both word and sound:

"Walkin' down to your place headed north on Vine past the power lines / the heat hangs in the valley...it's another record-breaking summertime / There's a band playin' down the block at Joe's / but somehow I'm not in to it to go / Let's stay home..."

Heller's lyrics suite the music and vice versa. Heller closes his collections with the only "standards" on the disc. While Wall of Voodoo's "Mexican Radio" might not be a true "standard" it does fit in well with Heller's Southern California view. The disc closes with "A Hundred Years from Today," the 1933 Young, Washington and Young composition covered by Ethel Waters, Jack Teagarden and Dean Martin. This is the most delightful song among many. Heller channels the spirit of Teagarden a spirit heard throughout the disc.

At My Age; Fools Like Me; Hurricane; Old Neighborhood; Let’s Stay Home; No One Else’ll Do; Couch; Falling Out of Love With You; Mexican Radio; A Hundred Years From Today.