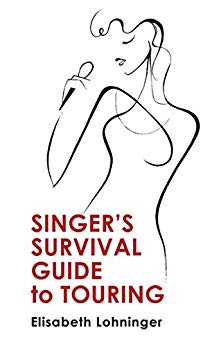 Singer/composer/arranger/bandleader/teacher Elisabeth Lohninger adds published author to her credentials with Singer's Survival Guide to Touring, a primer on how not to lose one's mind (and health) as a touring musician. To be completely fair and transparent, Lohninger has been a published author since 2013 when she released a series of short stories, A Walk in the Park (Lofish Music) and is also the publisher of the blog Jazz, Writing, and Other Follies. So what this all adds up to is that Lohninger is a true Renaissance woman. She and husband/pianist Water Fischbacher have been recording together and separately since the late 1990s and also ran their own Lofish Productions recording studio (which fell victim to gentrification a number of years ago). That is a resume demanding respect.

Singer's Survival Guide to Touring is a slim how-to book on what to do and not do as a touring singer, as well as a selective memoir of some of the more notable experiences she and her band have had while on the road. Her writing is pithy and unadorned, as I would imagine a conversation with her to be. In being so, Lohninger immediately dispels every romantic myth of the jazz musician. It is worth reading such romantic tripe before an introduction to Lohninger's bracingly frank version of things, and I recommend the opening chapter to Ross Russell's Bird Lives (Da Capo Press, 1996), "At Billy Berg's: An Obbligato."

Now that that is out of the way, Lohninger's book goes a long way beyond simply giving the nuts and bolts of being a touring musician and bandleader. For every jazz singer with the celebrity of a Diana Krall, whose estimated worth is $20 million, there are a thousand Elisabeth Lohningers. Yet, Elisabeth Lohninger is one of a kind, singular, especial. As such, she represents a legion like herself, jazz vocalists living the 21st century jazz life at ground level. What Singer's Survival Guide to Touring reveals between the lines is that making quality music is hard, demanding a talent, ability, and dedication, and requiring much energy, physical, and emotional resources. Lohninger has tips on how to maintain all of these elements and does so with a good, clear-eyed humor.

Lohninger's anecdotes from the road remind me of those adventurers climbing mountains and crossing glaciers, pushing themselves to such a physical and emotional limit that even the smallest hiccup could have dire consequences. Being on the road with a jazz band is a logistical challenge requiring a rigid timetable involving travel to the venue, set-up, sound check, performance, travel to the next venue. Eating and sleeping are not guaranteed, and Lohninger recommends getting them when you can. It is a grind, one that is hopefully fulfilling for both artist and listener. Lohninger obviously loves what she does and makes the reader appreciate what it takes to create what she does. We should be grateful.