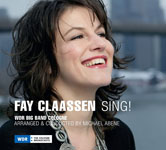 The WDR Big Band, led by New York composer and arranger Michael Abene, delivers splendid musical support for Claassen and, when combined with the Rundfunk Orchester, provides an amazing background of more than 120 musicians on Abbey Lincoln's "Throw It Away" and "Cover Me," and Billy Strayhorn's "A Flower Is A Lovesome Thing" and "Everything Must Change." The music comes out blazing with a power shuffle from the band on Carter's "Tight," as Claassen belts out the lyrics. Pianist Frank Chastenier and alto saxophonist Johan Horlen are the soloists on this piece, ending in a crescendo of horns.

Claassen demonstrates her ability to embrace ballads with a gentle vocal approach on the beautiful "Throw It Away," where she is accompanied by guitarist Paul Shigihara and Rundfunk's string section. Antonio Carlos Jobim's classic "Felicidade" is all but reborn here, with Claassen scatting and singing in Portuguese for one of the highlights of the disc. The music changes direction on Cy Coleman's "You Turn Me On," as the band tones it down to a cool level, with the singer providing a few more bars of scatting in a splendid jazzy number.

Taking the cool a step further, Claassen performs Mitchell's "Be Cool" in more of a funky/hip fashion than its title would suggest, making it interesting to hear. There are many noteworthy songs on this album, but two of its sparkling moments are a creative arrangement of Vincent Youmans' immortal "Tea For Two" and Strayhorn's ballad, "A Flower Is A Lovesome Thing." While the music begins with a big band burst, it ends on a humble note, with Claassen turning to the ballads one more time on finale, "Everything Must Change," a soft sweet song accompanied one final time by the Rundfunk Orchester strings.

There is always a bit of excitement when a fine jazz vocalist is blended with a standard big band, often resulting in good, straight-ahead music. But Sing! is especially enticing, considering there is an excellent vocalist in Fay Claassen, surrounded by an army of musicians, all combining to make what has to be one of the best jazz vocals/big band recordings around.

Tight; Is You Is Or Is You Ain't My Baby; Throw It Away; A Felicidade; You Turn Me On; Cover Me; Be Cool; Umhome; A Good Man Is Hard To Find; A Flower Is A Lovesome Thing; Tea For Two; Everything Must Change.