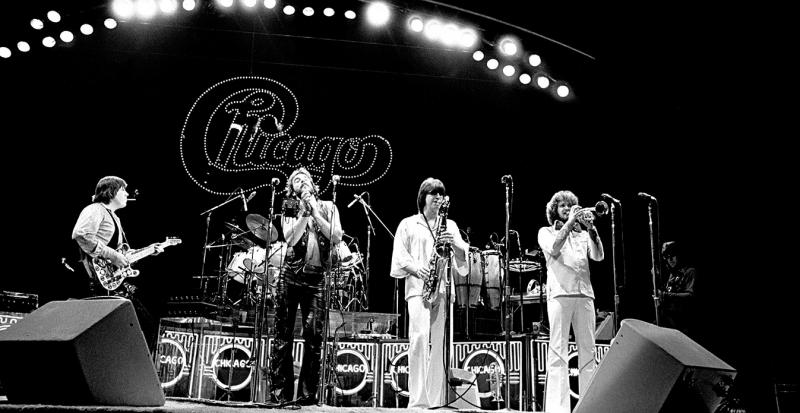 By MARK LEMPKE
June 7, 2014
Sign in to view read count
When people rebuff my attempts to share my love of jazz-pop-rock group Chicago with them, I understand their qualms. Really, I do. Few bands went from being quite so inventive to quite so predictable in the long, tough slog between 1968 and 1984. (The political parallels alone are terrifyingly relevant: many of the exact same people who were in SDS went on to become Yuppies by the midpoint of the Reagan years, but I digress.)

So, I understand when people tell me why they don't like Chicago. I might disagree, but I do understand. These are good folk who grew tired of 80's synth-hits like "You're the Inspiration" and "Look Away" and the 70s AM pop of "Call On Me" and "Old Days." They resented "Hard to Say I'm Sorry" taking up four perfectly good minutes of their prom. They long for the day they can shop at Macy's without hearing "What Kind of Man Would I Be?." I believe, however, that by focusing on the hits, they miss the band's true accomplishments. More than any band I can think of, Chicago's best material wasn't the songs that made it on the radio. Throughout the band's history, but especially in their first four studio albums, one can see bold experimentation, weird time signatures, avant-garde influences, and most importantly, attempts to make music that was most certainly not radio-friendly. These pieces, which exist almost entirely outside popular memory, are everything the band could have been, but ultimately was not.

To lend credence to my belief that Chicago doesn't suck, I have compiled a list of Chicago songs that least resemble the elements of Chicago that most people dislike. This runs a gamut from lengthy instrumentals with jazzy and even atonal solos, acoustic guitar exercises, and raunchy rock tracks. Many of these songs verify that Chicago's secret weapon throughout their first 10 years as a band was guitarist Terry Kath. Kath almost never shows up in anyone's list of great rock guitarists possibly because of his obscurity in a famously faceless band, and partly because to the extent that he is known, nobody would take Chicago's guitarist seriously. That would be a bit too close to declaring that, say, Bread's drummer or Air Supply's bassist were serious musicians. This is a shame, because Terry's guitar playing is both inventive and technically astute. Yet, his muted ego rarely felt the need to make his guitar solos the defining moment of most Chicago songs. Rock never rewards the humble.

While scientific research has shown that haters are, indeed, gonna hate, let us explore this list of Chicago songs that I feel are most likely to impress or win over the Chicago skeptic.

"Loneliness is Just a Word" from Chicago III. Listening to this song now, you might swear that your car's cd player momentarily switched to radio tuner, and you were listening to a jazz piece on NPR. Smooth and classy, this piece is keyboardist Robert Lamm at his most authentic with tasteful. Muted horns and Lamm's velvety voice carrying this short, low-key song through.

"Questions 67 & 68" from Chicago Transit Authority: A minor and largely forgotten top 40 hit, this gem from the band's debut effort deserves a closer listen. Stately and magisterial, the horn section is well used here, and Terry Kath's guitar plays a key, though understated role, playing electric guitar scales in the background with laserlike speed and proficiency. Cetera's soaring tenor and Danny Seraphine's drum chops add the finishing touches to a minor masterpiece. "Mississippi Delta City Blues" from Chicago XI: Recorded, but shelved, for the band's first and fifth albums, the group finally got the sound they were looking for by 1977's Chicago XI. This would be the last album they would record before Kath's death, and their acrimonious departure from original producer James Guercio. Terry Kath just drives this song, and the horn section even struggles a bit to keep up with him. "The Approaching Storm" from Chicago III. If you were intrepid enough to listen to Chicago's indulgent four-record Live in Carnegie Hall set, you would hear audience members audibly clamouring for this song. Chicago never played it at Carnegie, though, so you'll have to content yourself with this fine studio recording. Part of trombonist Jimmy Pankow's "Elegy" suite—an attempt to capture a coming apocalypse in musical form—this piece nails what a jazz concert on the eve of Armageddon might sound like. Everyone in the band is given a brief solo, showing off Chicago's virtuosity in fine form.

"Byblos" from Chicago VII: In a piece closer to a cafe performance than anything else in the band's catalog, Terry Kath goes subtle and acoustic. The result is a most intimate piece from a band that usually throws out punchy horn lines and aggressive 80's electric pianos with abandon.

"Plaid" from Stone of Sisyphus: For years this track was only available to the bootleg-buying public, as it was recorded for Chicago's up-until-recently shelved 1994 recording, Stone of Sisyphus. The entire Stone of Sisyphus project was something of a revolt against the power ballads and made-to-order Diane Warren hits that had comprised the band's greatest successes during the late 80s after Peter Cetera's departure. Moody, atmospheric and infused with Champlin's blue-eyed soul, this song could have signaled a bolder artistic direction for Chicago. Smoldering with the frustration of playing the same greatest hits on the Oldies circuit, it provided a rudimentary blueprint of breaking out of that vicious cycle. Sadly, Stone of Sisyphus was rejected by their record company, and the band turned to a big band cover album and a series of "Greatest Hits + 2 New Songs" for the rest of the 1990s. Already frustrated with the band's stagnant concert performances, Champlin would stick it out for another 15 years before finally calling it quits in 2009 and rededicating himself to his solo career.

"A Hit By Varese" from Chicago V: The Chicago V album was a massive success, topping the charts for nine weeks, and finding the band in a moment of transition between it's more ambitious origins and its string of Top 40 radio dominance that would continue throughout the Nixon-Ford years. The song complains about the straitjacket qualities of writing a hit single, and the song itself thwarts those very conventions. Borrowing traits from the song's namesake, avant-garde composer Edgar Varese, all three horn guys are given atonal solos to mix up the piece, which is written in what appears to be 12/8 time. This is a bold-as-brass way to start the record whose big hit was "Saturday in the Park"! Like "Plaid" the irony of Chicago publicly chafing against record industry convention would become more evident in the following years. One of the great shocks of my life was when the band dusted this one off during a 2001 concert performance. "Hold On" from Chicago XIV: Before he became known primarily as a balladeer, Peter Cetera insisted that he was a rock and roller, who was rarely given a chance to perform such material with Chicago. This song suggests that he might well have been correct—and this song merges Cetera's rock aspirations with his melodic instincts. Even in lesser efforts, Cetera was capable of generating at least two or three distinct hooks to make a given song memorable. "Hold On" does this, and it does this without relying on Chicago's horn sections for anything more than occasional window-dressing. Unfortunately, very few ever heard this song. As Jimmy Pankow once joked, Chicago XIV went aluminum; maybe plywood. For a song in a similar, but less forceful vein, consult "Gone Long Gone" from the otherwise ill-fated Hot Streets album. Cetera's upbeat song here is like a cross between the harmonies of America and the lead guitar of George Harrison.

"Oh, Thank You Great Spirit" from Chicago VIII: On this striking track, Terry Kath channels his inner Hendrix to create a foggy, ethereal song that follows a man's realization that he has died. The song just goes off the deep end in the last two minutes—is this symbolic of the void of death? the journey to the next life? Only Kath knows the answer, and he ain't tellin.'

"Ballet for a Girl in Buchanan" from Chicago II. This is a lengthy suite written by trombonist James Pankow and monopolizes the second side of the band's sophomore release. You have probably already heard two of the composite pieces of this effort, the hit singles "Make Me Smile" and "Colour My World." These two songs lose much of their flavor and context, however, if listened to independent of the entire Ballet. Pankow switches styles with abandon, putting baroque sections in the "West Virginia Fantasies" movement, while emulating Copland in the section titled "Anxiety's Moment." A more stylistically diverse effort in the same vein of the Abbey Road medley, Pankow gambles and it pays off.