By DOUG COLLETTE
October 19, 2019
Sign in to view read count 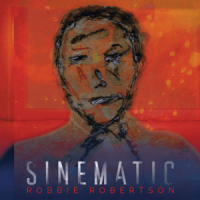 Robbie Robertson's ongoing fascination with the dark(er) side of human nature, combined with his longstanding fascination with film, begs the question of why it took so long for him to fuse the two interests in a solo album. There are more than a few memorable moments scattered throughout approximately sixty minutes of music on Sinematic and to posit those in the vernacular of film criticism, the record might well receive high marks for special effects, kudos for some bit players but some demerits on character and plot development. For all the modernity of the production that makes for some entrancing listening on headphones, too much of the material on this sixth solo album of Robertson's hearkens to the somewhat predictable pattern of songwriting he devised during the latter days of his work with The Band.

In what is almost but not quite a connect-the-dots pattern, Robertson appears to compose through following a template by which he turns out tunes like "The Shadow" and "Beautiful Madness" that are either too clever for their own good or alternately ponderous and pretentious. "Hardwired" radiates more of the shadowy atmosphere implicit in this album title, ironically perhaps because of its reliance on programming by co-composers Howie B and Joe Hirst. It certainly isn't the only track of the thirteen to engross by the depth and clarity of its sound alone, but it is one of the few that doesn't render merely a superficial attribute the sonics mastered so expertly by Gavin Lurssen. "Street Serenade" is intoxicating too, but that has more to do with the audio mix than vivid compositional detail -see "Rags and Bones" from Northern Lights, Southern Cross (Capitol, 1975) for its likely precursor.

Van Morrison's vocal on "I Hear You Paint Houses" also adds to the noir narrative Robertson concocts on and off here. Yet its melody, arrangement and style are again eerily similar to that last great album Robertson made with Helm, Danko, Manuel and Hudson, as well as the flawed masterpiece that is Cahoots (Capitol, 1971). In comparison to the Belfast Cowboy (who made a cameo on that latter album too), most anyone's singing talent might suffer, but the presence of the Irish soulman only highlights the limited range of Robertson's own voice: his croaky timbres have their charm, but nevertheless beg the question of why he doesn't more often enlist the help of others to sing his songs: Lucy Satterfield imbues "Walk In Beauty Way," (a tune she actually co-wrote with the songwriter/guitarist) with a sultry air that becomes altogether dreamlike before the track concludes.

Robertson's singing carries an unusual depth on "Once Were Brothers" and that's hardly surprising. The song revolves around autobiographical references introduced by its title, that of the documentary about the iconic group based on the author's memoir Testimony (Crown Archetype, 2016). But it is actually the backup vocals of Citizen Cope and J.S. Ondara that bring out the poignancy of the recollection more than his own. Meanwhile, the absence of the Canadian's guitar is somewhat confounding, although it is slightly more prominent at the outset of "Dead End Kid." That conundrum might well be explained by the years Robertson spent as a guitar hero, with Ronnie Hawkins and Bob Dylan, but it is one rendered deeper by the presence of Derek Trucks (and his guitar partner from Eric Clapton's band, Doyle Bramhall II) on "Remembrance." Ostensibly a bonus track, the string effects mix with the fretboard work to conjure such a ghostly atmosphere as to suggest such an approach might well be a fruitful initiative for Robertson to pursue after this sixth solo endeavor of his. The other instrumental here is also the album's shortest cut: "Wandering Souls," doesn't go on long enough to reveal if this core trio of Robertson, bassist Pino Palladino and drummer Chris Dave—all three of whom appear throughout the record—ever engage with each other long enough to squeeze out sparks comparable to its corollary.

The inclusion of Robertson's self-created paintings representing each song on Sinematic suggests ever so slightly the man may be spreading himself too thin, at least insofar as writing, playing and recording music is but one of his abiding passions (this album also was inspired in part by working with Martin Scorsese on the latter's movie The Irishman). The deceptive but fleeting depth at the heart of this album hints at what he might produce if he concentrated on composing, performing and recording, if only for the period of time required to follow the course of his inspiration.