Yitzhak Yedid: Since My Soul Loved

By EYAL HAREUVENI
November 25, 2009
Sign in to view read count 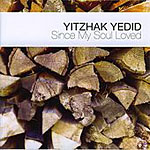 Israeli, Australia-based composer and pianist Yitzhak Yedid dedicates his new composition Since My Soul Loved to the intertwined concept of love and happiness. "Regardless of all other events, as soon as we find love, we will find happiness," he is quoted in the liner notes. And Yedid is indeed an optimistic musician, who dedicates his art to crystallize a new musical language that encompasses different musical languages and neighboring cultures— modern contemporary music, religious Jewish music, from Sephardic and Ashkenazi origins, and traditional Middle-Eastern scales, and obviously a jazz improvising attitude, taking upon himself to suggest an optimistic vision, a path of musical love to the torn and war-ridden area of the Middle-East.

This new composition is performed by a chamber quintet— Yedid on piano, his long-time musical partner, Ora Boasson-Horev on double bass, Daniel Hoffman on violin, Galia Chai on Viola, and Jonathan Gotlibovich on cello. Yedid divides each of the four movements to colorful and poetic images that outline his imaginary road-map for this composition. The musicians were asked to interpret and improvise on these images, while conveying their own senses and emotions, to create sub-compositions within the greater one that attempt to break out of the mold. Similarly, Yedid encourages listeners to construct their own narrative based on their own imagination and understanding.

The composition progresses from the first movement that focuses on deep, often disturbing, contemplation to a powerful and dynamic second movement that conjures a rapid interchanging and surprising set of improvised miniatures. The third movement begins with a beautiful and serene piano solo that introduces a deeply emotional theme inspired by a prayer from the Yom Kippur services, arranged here for the double bass to play the leading role of the cantor while the other musicians play the role of the repeating praying audience. The composition is concluded with a similar contemplative tone as in the first movement, but this time all five musicians attempt to reach a joint harmonic articulation, even if it sounds sometimes as if it were sliding into an abstract one.

Since My Soul Loved is one of the most moving compositions of Yedid so far, performed majestically by excellent musicians who truly identify and believe in Yedid's artistic vision.

Title: Since My Soul Loved | Year Released: 2009 | Record Label: Between the Lines