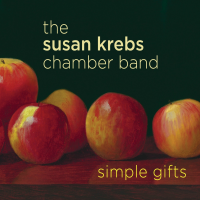 Dan Bilawsky in his AAJ review of Krebs' Simple Gifts

Yes, I think nothing of drawing inspiration from my betters on the AAJ staff when stuck on a review. I had reviewed Everything Must Change (GreenGig Music, 2012), finding the release very fine. But Simple Gifts represents a stunning evolution that is different altogether. Here, Krebs dives into the heart of Americana in the same ways that Jacqui Sutton ( Notes from the Frontier: A Musical Journey Self Produced, 2012); Laurie Antonioli ( American Dreams (Intrinsic Music, 2010); and Tierney Sutton ( American Road (BFM, 2011)) have.

I often use the term "organic" to describe music. When I use this term in describing Kreb's Simple Gifts, I summon the visions, sounds, and smells of my Grandparents home in rural Arkansas and their chicken-coup-turned-storage-shed that swelled from humidity and was perfumed deeply of dust and humus in the near-cool Fall days of October around Logan County Fair time. Krebs' recording is that potent, fecund, and essential. It is an extension of the same pioneered by Cassandra Wilson in the 1990s: an extension and a perfection of that effort to push jazz boundaries into alternate areas in the same way that Western Swing did in its heyday.

Krebs does not waste her time with the "standard" standards. He chooses lesser-worn paths to great effect. "Let's Call a Heart a Heart" and "Looking Back" are both characterized by reedist Rob Lockart's use of bass clarinet in place of the double bass. So perfectly does Lockart's various reeds meld with the violin and viola of Paul Cartwright, that the combination, in this acoustic setting, damn near defines a new genre of performance. "Falling Grace" and the Shaker title tune sport almost perfect arrangements, arrangements that capture in 20/20 the true American Pastoral. I do not anticipate hearing a more satisfying or original recording the rest of this year.

Let's Call A Heart; Looking Back; So Many Stars; Once Upon A Summertime; Falling Grace; Throw It Away; For All We Know; Simple Gifts.