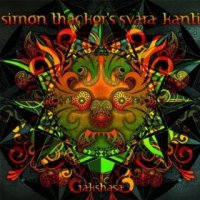 Following the acclaimed guitar concerti of Nava Rasa Ensemble (Slap The Moon, 2011), which saw nine musicians blend Carnatic, Hindustani and Western classical traditions, classical guitarist/composer Simon Thacker scales back the ensemble size, but not his ambition, for Rakshasa, a formidable quartet exploration of Asian and Western sounds that bends the traditions as much as it does one's preconceptions. Specially commissioned works by composers Terry Riley, Nigel Osborne and Shirish Korde sit alongside Thacker's own compositions and arrangements of Punjabi folk songs. Like guitarist John McLaughlin's band Shakti, Thacker draws from both Northern and Southern Indian classical music, but whereas McLaughlin brought jazz vocabulary to the mix, Thacker's personal idiom is more heavily influenced by flamenco and classical traditions.

Thacker's guitar intro to "Dhumaketu" conjures flamenco and Indian spirits and is a continuation of a tradition whose roots lie with the arrival of the gitanos to Andalucia from India in the early fifteenth century. Violinist Jacqueline Shave states the melody before uniting with tablaist Sarvar Sabri and Thacker in intimate dialog where unison lines alternate with rapid call and response. These three-way dynamics are a recurring feature of the seventy plus minutes of Rakshasa, with the rhythmic fluctuations and tonal variations of composed and improvised lines proving constantly engaging.

Riley's sweeping fourteen-minute instrumental "SwarAmant" takes in European classical harmonies and Indian rhythms, pitching guitar and violin in striking contrapuntal orbits of shifting tempos where virtuosity and simple melody go hand in hand. Both a student and teacher of Indian classical music in his time, Riley's compositional breadth provides plenty of grist to Thacker improvisational mill. Riley's circular motifs and repeating patterns provide a framework for the dense, breathless unison lines between violin and guitar and Sabri's equally demanding—and notated—tabla parts. The contrast between delicate finger cymbals and dashing flamenco rasgueos hints at the range and depth of this compelling work.

Shirish Korde's ""Anusvara—6th Prism" begins from voice and drone and is described by its author as a sonic meditation. Yet the constant drone apart, this episodic piece is bursting with drama. Tense, insistent unison passages dissolve into slow, lyrical terrain with Shave's exquisite tone to the fore. Guitar, vocal and violin move between measured dialog and heady exclamation and on first listen this number's wholly unexpected conclusion sets the blood racing. Thacker and Sabri let rip on the scintillating duo piece "Svaranjali," while Shave expands the sonic playing field on the slightly manic "Multani"—a riveting, raga-based trio excursion, which for sheer power alone, provides an album highlight.

A tryptich of folk songs—three odes to love—highlights the romantic, lyrical nature of Punjabi song tradition. The catchy pop-like "Kahnu Marda Chandariya Chamka," the tender "Main Tenu Yaad Aavanga" and the rhythmically vital, dancing "Shava Ghund Chuk Ke" are vehicles for Kaur, and celebrate melody and story-telling. Thacker's "Rakshaka," with its psychadelic sound manipulation is singularly eerie. Singing Tibetan bowls, waterphones, and reverse recording techniques inspired by guitarist Jimi Hendrix' "Are You Experienced?" evoke the aura of Rakshasa, the shape-shifting demon of Hindu and Buddhist mythology. In the context of the music that goes before, "Rakshaka" may make for a surprising finale, yet its innovation and bold juxtapositions are in line with the spirit of the recording as a whole.

Pristinely mixed and produced by Calum Malcolm and boasting a lavish gatefold jacket beautifully illustrated by Sam Hayles, Rakshasa is a delight from start to finish. Thacker has crafted a work—an obvious labor of love—that would grace any classical concert hall or World Music festival. In short, a contemporary classic.