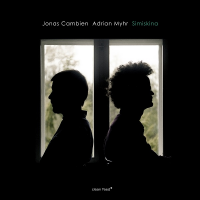 Since relocating to Oslo in 2008, Belgian pianist Jonas Cambien has immersed himself in the Norwegian scene. As well as his well-received trio which waxed A Zoology Of The Future (Clean Feed, 2016), he's also part of improvising collective Platform (which can be heard on Flux Reflux (Clean Feed, 2017)), and new music ensemble Aksiom. Those influences all play a part in Simiskina, the title of the debut recording by Cambien and double bassist Adrian Myhr, (whose credits include reedman Tobias Delius and trumpeter Axel Dorner), as well as the moniker of the duo.

The pairing revels in intimate exploration of both simple and extreme textures in a 35-minute program comprising 10 short cuts which sound spontaneously generated. Almost the entire focus is on the interaction between the two principals, with no space for longer individual excursions. Both Cambien and Myhr share the same ethos and so reinforce each other's direction. Both make full use of their instruments, Cambien in particular favoring John Cage inspired preparations variously evoking struck wine glasses and gamelan orchestra, while Myhr proves fluent in the extended techniques to create indeterminate throbs, taps and thwacks.

Such is the convergence that the series of pieces resembles a suite of good-natured encounters which owe a debt to minimalism as well as improv. The introductory "Hi" with its combination of bell-like piano fragments and shuffling sounds from the bass, which then moves to bowed voice-like phrases, gives a clear idea of the range that follows. Together they craft a varying mix of light (like "It" with its blend of scrabbling bass and bright, harp-like piano tolling) and shade (like "We" which matches scratchy sawing rich in overtones, with a repeated prepared piano pulse).

Where there are pauses they serve not so much as junctures at which the paths might diverge as opportunities to take a breath before resuming. It's a profoundly personal journey from which fellow travelers need not feel excluded.