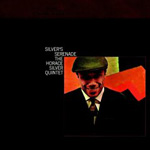 What's with the producers at Blue Note/EMI? Or is it engineer Rudy Van Gelder who decides what gets reissued? Silver's Serenade is vintage, nicely representative music by the pianist-composer's best known ensemble, but it was never out of print. By contrast, one of the few Silver sessions for which the term "inspired" might apply—Further Explorations by the Horace Silver Quintet (1958)—languishes in the archives, currently available only as a pricey Japanese import.

Recorded in 1963, Silver's Serenade was the last complete recording by a cast of players first assembled in 1959. It's hard to argue against the leader's choice of personnel—selected as much to execute the composer's tight ensemble passages with accessible directness and clarity as to lay down economical, groove-tight solos.

The title tune, a loping, laid-back two-beat enticer that sits on whole notes like a serenade should, is another immediate attention-grabber by the gifted songwriter. Blue Mitchell's trumpet solo sustains the song's silky seductive allure before Junior Cook's turn on tenor leaves just enough space between phrases to set the stage for the leader's somewhat disjointed collection of funky riffs and catchy quotes, along with the trademark left-hand "bombs," or low-register chord clusters, which the pianist employs like a second bass drum.

Much the same formula is applied to the remaining tunes, though Roy Brooks exchanges his brushes for sticks and an insistent shuffle beat to insure that "Let's Get to the Nitty Gritty" makes good on its claim. Junior Cook has never sounded more in command of the upper register, confirming reports that he had been practicing with Coltrane at this time: his tenor solo is a model of restraint and construction, building to its climactic top tone just before passing the baton to Silver. An alternate ensemble chorus played before the out chorus recalls some of the more ambitious arranging characteristic of the maestro's late-'50s units.

Bassist Gene Taylor returns to a solid two-beat feel complemented by Brooks' spirited backbeat on snare to serve up unadulterated funk framed between the stop-time choruses and mystic allure of the minor-key "Sweet Sweetie Dee." The veil of mystery remains in place on "The Dragon Lady," where the composer harmonizes the horns in 4ths, establishing a mood evocative of a Far East setting. The set closes with an up-tempo original descriptively entitled "Nineteen Bars." Despite fluent solos by the principals (especially the surprising Junior Cook), Roy Brooks' extended percussion break comes as welcome relief from Silvers' repetitious stop-and-go accompaniment patterns (stop-time or pedal tones followed by 4/4 swing) on each of the final three numbers.

Even with the appealing title song and innovative departures from eight and twelve-bar song structure, Silver's Serenade, though not without grey scale, is monochromatic compared to the composer's fresh and sparkling, multi-hued work on compositions such as "The Outlaw" and the enchanting "Moon Rays" from Further Explorations. (An unfortunate title—"further" sounds like an inessential addendum; "explorations" like an experimental workshop.)

Perhaps with a face-lifted cover and a less tentative title ("Silver's Symphony"?), the brass at Blue Note will still see fit to reissue the earlier date.