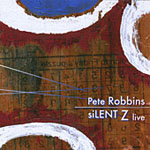 Since his 2002 debut, Centric (Telepathy Records), saxophonist Pete Robbins has charted a centrifugal trajectory, moving outward from traditional boundaries. His previous releases—Waits & Measures (Playscape, 2006) and Do The Laugh Hate Shimmy (Fresh Sound New Talent, 2008)—incorporated elements of jazz, rock and electronics with thought-provoking writing and improvisation. Incessantly stirring the creative juices in any number of projects/ensembles, this release documents Robbins' siLENT Z band, at New York's Cornelia Street Cafe and would prompt the question of how his fertile ideas translate live.

"Edit/Revise" has that "in the club" party vibe with its noisy/funky persuasion. The band's kicking it hard, fueled by Sorey's heavy back beats, Robbin's soulful reed, and Neuman's processed horn. It's all good, but siLENT Z's true magic is unveiled in the next track, "His Life, For All Its Waywardness" with Gamble's lengthy and atmospheric guitar intro. His infectious riff (which is threaded throughout the track) sets up the melody, as each musician enters a swelling tide that leads to unexpected soundscapes of intensity and repose.

These shifting sonic dynamics are intriguing and telling of the music's ingenuity. "Some Southern Anthem" contains a totally hip syncopation, freaked-out guitar runs, intricate horn vamps, and concludes with thunderous drums; whereas "Bugle Call" is darkly tinted, yet alluring as Morgan's bass solo shapes the mesmerizing tune. The recording also represents artists that can swing on a dime on "Eliotsong," maneuver multiple time signatures in "But If It's Empty" as Robbins and Sorey solo simultaneously like possessed madmen until solitude enters with Smythe's freely expressive piano spot. While it may be best to experience this group in person, the kinetic energy and inventiveness of siLENT Z Live translates very well.

Edit/Revise; His Life, For All Its Waywardness; Cankers and Medallions; Some Southern Anthem; Bugle Call; Eliotsong; But If It's Empty; Improvisation.