By Eyal Hareuveni
December 28, 2015
Sign in to view read count 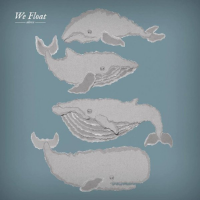 Silence, the debut album from the Norwegian-Swedish, Malmö-based quartet We Float, offers well-crafted, dreamy and intimate jazz songs with a pop sensibility, characterized by a hypnotic, infectious pulse. This kind of aesthetic may sound to some as treading in the sonic territory of the Swedish-Danish trio Nuaia, but this first impression is deceiving —there is more from this fine group in Silence.

We Float, whose name is inspired by PJ Harvey song (taken from Harvey's White Chalk album, Island, 2007) is led by Norwegian bassist Anne Marte Eggen, who wrote all the music, and consists of Swedish vocalist Linda Bergström (both Eggen and Bergström began to play together as the We Float duo), keyboard player Fanny Gunnarsson and drummer Filip Bensefelt. Bergström and Gunnarsson collaborated before on the Rasmus Nyvall Quintet, whose debut album was also released by the musicians-collective Havtorn records.

Each of the eight songs suggests a different landscape, often inspired by the close sea and its waves, as a metaphor for the stormy, emotional dramas sketched in the songs. The opening, keyboards-laden instrumental "Intro" is rooted in a prog-rock dense texture, but it is the exception. The following moving, beautiful and lyrical "My Bones" and "Silence," both sung in English, stress the maturity of this group. On both songs you can sense the commanding, evocative delivery of Bergström, the nuanced, tasteful rhythmic support of Eggen and Bensefelt, Gunnarsson's wise usage of vintage keyboards that intensifies the sonic palette, and above all, the emphatic interplay. The chamber-like "Farewell" and the closing, "Vinden," (the only song that is sung in Swedish), highlight Bergström's elegant, deep, emotional delivery.