By DOUG COLLETTE
September 10, 2017
Sign in to view read count 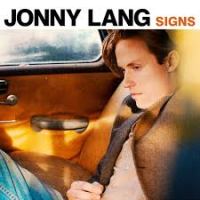 The weathered voice recounting life's travails on the opening track of Signs, "Make It Move," is in marked contrast to the boyish countenance of Jonny Lang as pictured on the cover of the album. The distortion on his electric guitar, however, suits the chain-gang song likes of that number, even as it leads directly into the jump of the following cut, "Snakes;" here the caterwauling voice leading into the fretboard solo carries all the repulsion the title might conjure up.

And if all that sounds like prototypical blues of a sort, "Last Man Standing" stand out in greater with polished structure that would resonate with the classic rock audience. Over the course of his two decades-plus career, Jonny Lang's never been purist to a fault and on this first album of his in four years, he avoids that mistake too. Accordingly, the title song is a modified twelve-bar with gospel overtones within the vocal refrain, surefire notice Signs is not merely the work of a guitar hero, but a mature musician, cognizant of his roots.

The compact backing band Lang employs on the record stay with him at every turn. Occasionally augmented with extra guitars and keyboards plus background singers, the sound of the quartet nevertheless remains lean through the eleven original songs on which Jonny collaborated, in the writing as well as the producing, with guitarist Drew Ramsey, keyboardist/vocalist Shannon Sanders, among others. This creative unity allows for a variety of material, including the soulful, piano-dominated likes of "Bring Me Back Home," on which a clean guitar solo matches the falsetto voice Jonny uses.

Wisely leaving extensive production for the final cut, the artistic team overseeing Signs imparts an almost religious fervor to its conclusion, "Singing Songs," via the lavish orchestration of violins, violas and cellos. It's a dramatic and heartening close to an album where Jonny Lang's radiated more than a little restless pain. Nevertheless, this sensation would seem to be the source of this Grammy Award-winner's creative impulse. While there is nothing groundbreaking here, it's difficult, if not impossible, to argue the value of the expression, precisely because it is so clearly constitutes a distinct form of deliverance for this artist.

Make It Move; Snakes; Last Man Standing; Signs; What You’re Made Of; Bitter End; Stronger Together; Into The Light; Bring Me Back Home; Wisdom; Singing Songs.