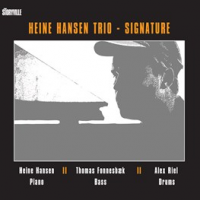 Heine Hansen is a moderately talented Danish jazz pianist who, to fit the age, is being billed as eco-friendly. The liner notes, for this, his first album, are titled "The Green Groove" and kick off with a quote from Van Morrison: "Rave on, Walt Whitman, nose down in wet grass."

Next minute we lurch perilously from Van The Man to Beatrix Potter with "the birds almost bursting out of their little feathered suits." Jemima Puddle-Duck and Peter Rabbit snap their fingers and dance the hucklebuck to Hansen's "playful piano, bubbling over in song."

Christian Munch-Hansen, music critic, author and teacher and—more importantly, one suspects—committee member of the Ben Webster Foundation, which awarded 28-year-old Heine Hansen the 2016 Ben Webster Prize, goes on to gush about the pianist's "grooves in shades of green, fresh and light-hearted—yet with the melancholy of autumn and winter beneath the surface, encoded in the weave."

What on earth would Ben Webster have made of such guff?

Or of this: "A high diver poised on a blade of grass, a basin of water on the ground below. When the light appears in May, the trees don't hesitate. Now Heine Hansen, too, has sprung. Listen and hear where to."

Without further ado, let's do just that. Signature comprises 11 songs, all originals, mostly riff-based and repetitive, busy without actually going anywhere. To judge from the titles and Munch-Hansen notwithstanding, they would appear to have little to do with ecology, except perhaps the closer, "Wind," although that could equally well refer to flatulence.

"You're Gone And I Remain" is based on a left-hand, soulful riff that brings to mind some of those things Bobby Timmons used to do in the days when men were men and only green after a night on the tiles. What's missing is Timmons' swing and creativity. Bassist Thomas Fonnesbaek tries to lift the proceedings but retreats rapidly into the shadows.

"In-Between Black And White" is—you asked for it, Heine—grey but does threaten to get more colourful (perhaps even green) on occasion.

The best tracks are "Gee Blues" and "Low Profile." Both motor along quite nicely.

The other numbers are all much of a muchness. Nothing really stands out, though Munch-Hansen says there are "roots we cannot see that nevertheless connect things on a deeper level." In terms of practicality, more swing, more oomph, more experience—all are badly needed before anyone outside of Denmark is likely to get very excited about Heine Hansen.