By GLENN ASTARITA
October 22, 2017
Sign in to view read count 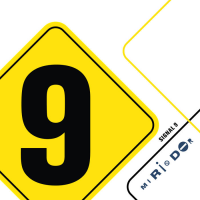 Here, the influential French-Canadian prog rock outfit Miriodor releases its 9th album. Since its formation in 1980, the band has been nestled within the Rock in Opposition movement alongside cutting-edge ensembles such as Henry Cow (UK), Art Zoyd (France) and Univers Zero (Belgium). Hence, the premise behind much of this was in response to the music industry shunning rock-based units that elevated matters into highly artistic or unorthodox art forms.

It's more about a team-based approach. You won't hear endless soloing sprees, yet the band seamlessly merges space rock, neo-classical, hard-rock, prog rock and other idioms into its arsenal, coupled with complex time signatures, false endings and 360-degree turnarounds. They occasionally skirt avant-garde jazz amid sectors that include bizarre takes on carnival music and quirky reengineering processes.

Deep bass lines, pumping backbeats and a mélange of polytonal keys and otherworldly EFX elicit notions of strutting through the Cosmos. They also combine a theatrical sensibility via shifting sequences and off-centered grooves along with countless aural treats, while instilling a bit of melodrama in spots. On "Chapelle lunaire," the frontline gels to a doomsday-like noise shaping exercise, transformed into a calming vista with a delicate electric piano hook by either Bernard Falaise or Pascal Globensky. Moving forward, the musicians inject snippets of British Canterbury type prog with whimsical choruses and alternating motifs. Moreover, the instrumentalists' epigrammatic detours and alternating storylines generate a source of interest.

"Le ventriloque et le perroquet" features subtle voice overlays, Falaise's crunching guitar licks and the rhythm section's snappy grooves along with a downward spiral, Spaghetti Western like treatments, and other nicely integrated oddities. More importantly, the ensemble assembles these works with pinpoint accuracy as though they're screenwriters penning an involved plot. The program is not loosely organized, and while these are complex compositions, the quartet does its best to craft a highly entertaining outlook, which is a factor that has become a calling card of sorts, since the group's inception.