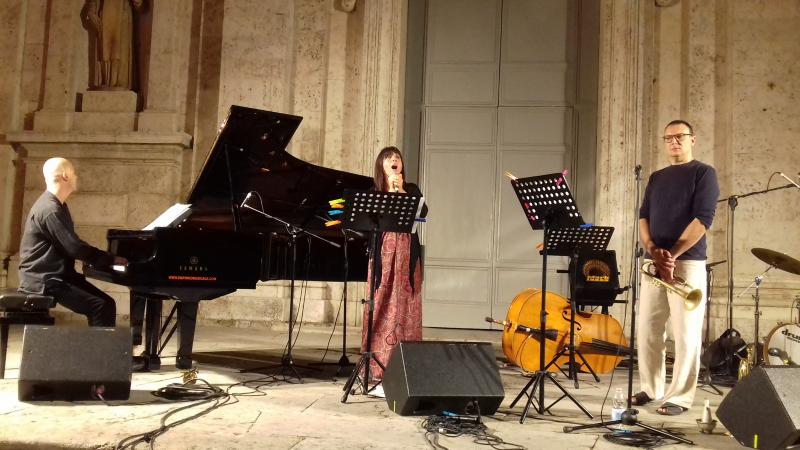 By DUNCAN HEINING
August 12, 2016
Sign in to view read count

This was my third time in Siena. It never disappoints. It frequently surprises. And it always leaves one with a wonderful sense of the music’s persistence and vitality, qualities sustained across borders, continents and generations.

Built around the city's Jazz University Summer School, the Siena Jazz Festival is unique. Each evening, tutors and students perform in a variety of gorgeous settings in this most beautiful of cities. One night it is a stage set against the 16th century backdrop of the Basilica Provenzano, another dwarfed by the mighty Basilica di. S. Domenico with views of the white and black marble of the Duomo and another in a quiet garden of one of Siena's 17 contradas. It is a feast for both eyes and ears.

The students come from as far afield as Australia, Israel and Argentina, with many, of course, coming from Italy and the EU. They range in age from 14 to 30 something with levels of ability stretching from the competent to the gifted with many of the 120 or so attendees already the finished article. For the tutors, Siena Jazz prides itself on selecting musicians who are both great players and excellent teachers. The tutors play on the weekend dates with the students performing mid-week in groups formed at the school.

The joys of hearing and seeing musicians like Diana Torto, Stefano Battaglia, Miguel Zenon, Avishai Cohen, Nir Felder and Fulvio Sigurta are obvious. But it is the pleasure of hearing young musicians on the verge of discovering or already finding their own voice that makes Siena Jazz special. A group of very young Israeli students—Roy Ben Bashat (16 guitar), Alon Roe (16 alto) Avshalom Meidan (17 piano), Ben Ben Franklin (16 drums), Moor Bezalel (17 trumpet) Shahar Amdor (17 tenor), with Italian student Antonello Losaco on bass -were particularly impressive, sounding mature and confident beyond their years. That same night Catalina Hardoy, an Argentinean singer with an intriguing and individual voice and phrasing, and Julia Kriegsmann, a German alto player with a hint of Art Pepper about her, both made strong impressions.

Several other young musicians showed real promise including Israeli guitarist Ely Perlman (17), a (somewhat) more mature Turkish pianist Ercument Orkut, Italian tenor player Vincenzo De Felice and Australian trombonist Tim Coggins. Perlman's abilities belied the frown he seemed to wear, while Orkut has a beautiful classical touch and constructs his solos drawing on a musical background in jazz, as well as classical and Turkish music. De Felice, on the other hand, has a quality to his playing that is already highly distinctive and assured and Coggins' number should be on every self-respecting bandleader's cellphone.

The most interesting music, however, came from a sextet of singer Camilla Battaglia (daughter of pianist Stefano), Nicola Caminiti on alto, Nicolo Masetto on bass, drummer Mattia Galeotti and Belgian pianist Margaux Vranken. More than a hint of ECM about it and beautifully constructed and executed. Vranken, in particular, is quite clearly a player of real character and skill, while Battaglia's pedigree was evident.

For the tutors, vocalist Diana Torto opened the festival in a tribute to Azimuth with Stefano Battaglia and trumpeter Fulvio Sigurta. Torto's range and accuracy is matched by a richness of tone, complemented perfectly here by Battaglia's choice dense, even ominous chords and angular melodies. There was something of folk music and the baroque about the music, captured perfectly by Sigurta's warm. Softly vocalised trumpet and fluegelhorn. As with Azimuth, there was that sense of longing and sadness, hard to express in English, or even in the expressive emotional palette of Italian, but encapsulated perfectly in the Portuguese "saudade."

Sadly, the next night's voice-led trio with Theo Bleckmann, guitarist Ben Monder and Battaglia once more left me cold. My reaction was, nevertheless, completely at odds with much of the audience who responded to Blackman's fusing of voice and electronics with enthusiasm. The quintet that followed with Miguel Zenon on alto, Sigurta again, guitarist Nir Felder, bassist Furio Di Castri and drummer Ettore Fioravanti on drums was more to my liking. Zenon and Sigurta offered a fine balance between their contrasting styles, the former diving deep into the melody and rhythm with the latter floating Rava-like over the music. Di Castri and Fioravanti anchored the ensemble with great subtlety, allowing the frontline considerable latitude harmonically and rhythmically, with Felder shifting between frontline and rhythm with ease. The music combined freedom and coherence quite beautifully.

Zenon and Felder performed the next night in a quartet with bassist Matt Penman and drummer Justin Brown. Felder was, in some ways, the musician who most impressed me this week. He is an exceptional soloist with an incredibly proficient technique—a touch of Metheny and a hint of Frisell but without the whimsy!—and a highly empathic accompanist. When Zenon and Felder locked on the head of the altoist's "Cyclo" over a deep groove from Penman and Brown, something primal seemed to happen, providing the week's pivotal festival moment.

A quartet of trumpeter Avishai Cohen, pianist Matt Mitchell, Matt Brewer on bass and "student fave" Justin Brown were just as good, however. They offered an intriguing mix of moods and styles that sometimes seemed to channel Miles Davis from the mid-sixties through to the Dark Magus years of the seventies. A long, loose opening number with electric trumpet with occasional hints of rock led to something more obviously tonal and rhythmic, an echo perhaps of Davis' second great quintet. Their third number opened with a dramatic exhibition of drumming from Brown which built slowly, before their final number—a fast-paced, groove-based number from Brown, proof if needed that the spirit and gifts of Tony Williams are still among us.

We missed a weekend of gigs from the tutors, setting off on the long journey home by road. This was my third time in Siena. It never disappoints. It frequently surprises. And it always leaves one with a wonderful sense of the music's persistence and vitality, qualities sustained across borders, continents and generations.