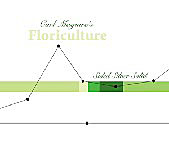 The second recording for pianist Carl Maguire's group Floriculture, Sided Silver Solid, presents a refined sensibility for instrumentation that demonstrates its potential for a larger, even orchestral, application. Accompanied by the members of his quintet, violist Stephanie Griffin, reedman Oscar Noriega, bassist John Hebert and drummer Dan Weiss, Maguire exercises his capacity for charting sonic courses that show strength, ingenuity, solidity and, most of all, character.

At no time, do any of the instruments sink to a place of Insignificance, from the first rip of a string inside the piano in "Rope/ Rim..." to the harmonization of the viola, bass and bass clarinet in ..."Rope/Rim." The music flows simply. It is only a matter of evolution that one instrument speaks louder or more adamantly than another, or that suddenly the transitions, from one thematic concern to another, occur when the lead instrument changes, in the rise and fall of sets of multiple phrasings. Maguire's compositions have a distinct orientation, not wanting in the least for richness and integrity. The ideations, from one piece to another, are similar; each piece appears to be an extension of the one before.

The precision of juxtaposing sound quality and timbre open the listening experience as well as placing it within context. Frequently, melodic textures subsume repeated phrasings that more often than not cascade in endless sound paintings. The seriousness of each gesture is inescapable, no matter what instrument comes to the foreground: the piano, the bass, or the drums in the lengthy "Modern Enunciator," the drums or alto sax in "Phoenicia & Cordelia," the viola in "Basic Botany," the drums in "Sensation Whereby Space" or the Fender Rhodes in ..."Rope/Rim."

McGuire establishes a tonal range where the viola touches high peaks, and the bass and piano combined reach into complimentary lows, sometimes through synchronized progression ("Sex Cog"), other times through alternation ("Phoenicia & Cordelia") , or a combination of both ("Sensation Whereby Space"). This music is a concrete exploration of an instrumental motion, where the music never dwells in the same place for too long and any metaphorical connection to the world outside the music is on purpose.

Sided Silver Solid is an example of how strong the influence of the continuity of electronics can be on the playing of acoustic instruments. The paradox is that the combination of the discrete nature of electronics has rendered the analog characteristics of acoustic sound more fluid, and the result is a breathless reveal of an entrance into a strangely symmetrical magical sector of space-time.