Wilson & Moore: Side by Side 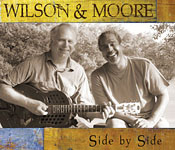 Chip Wilson is best known in and around New Orleans as the former guitar luthier who extracts supreme sounds from the instrument he once made a living producing. Jesse Moore is a versatile performer equally at ease on stage in music clubs and theaters, on television, or on film. Side by Side, the debut album by these two veteran performers of the New Orleans music scene, is a collaborative effort that has the visionaries of the neighborhood known as The Musician's Village beaming with pride.

The Musician's Village was conceived by New Orleans natives Harry Connick, Jr. and Branford Marsalis, in the aftermath of Hurricane Katrina. The acclaimed musicians/New Orleans music advocates partnered with the New Orleans Area Habitat for Humanity to provide the blueprint, the resources, and the infrastructure needed to make that vision a reality. The vision for the Musician's Village was to provide the "establishment of a focal point for teaching, sharing and preserving the rich musical tradition of a city that has been done so much to shape the art of the past century."

The primary objective of the Village is to provide an affordable housing option for the musicians of the city, allowing for the remigration of musicians who were displaced and stability for those who managed to stay. The secondary or long-term goal was to provide a hub for musical creativity, given the penchant for organic musical collaboration and instruction that are trademarks of New Orleans neighborhoods. This cooperative effort from Wilson & Moore, neighbors in the Musician's Village, serves as a metaphor for the recovery status of the city, moving beyond survival and toward prosperity.

Both artists have previously released stellar albums that have been recognized with awards and nominations by local music publications.

Tight vocal harmonies and minimal acoustic instrumentation hint of Simon & Garfunkel-meets-John Lee Hooker, with pop, roots, and blues qualities evident throughout, with the boogie-woogie "All of Y'all" kicking off the collection at a lively tempo. "Ahnalee" features Wilson's acoustic 6-string arpeggios behind Moore's poignant and emotive composition, with producer Anders Osborne joining in on organ. "Bayou du Chat Noir" is a classic blues tune with a touch of Cajun in Jimmy Thibodeaux's accordion—an imaginative creation that chronicles the fall of a southern Louisiana town and the demise of the musicians that once benefitted from its prosperity.

Reminiscent of Randy Newman's Good Old Boys (Reprise, 1974) in its ability to capture the culture of a region in both story and musical sensitivities, Side by Side is an essential listen and southern Louisiana narrative.

All Of Y'All; Nobody's Doin' It Right; Slip Away; You'll Get Through It; Baton Rouge Baby; The Road Ain't Easy; You're Killing Me; The Willow; Bayou Du Chat Noir; ); Ma Belle Creole.

Title: Side by Side | Year Released: 2010 | Record Label: Threadhead Records