Frode Gjerstad & Paal Nilssen-Love: Side by Side 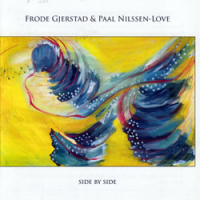 Prominent Norwegian improvisers Frode Gjerstad (alto saxophone, clarinets) and Paal Nilssen-Love (drums) toured North America in 2008 sans a bassist, and recorded this album at a studio in upstate New York, accentuating their synergy via a largely rough and tumble implementation. Gjerstad shows a fondness for the upper-register and produces a myriad of microtonal and edgy sound-sculpting statements atop Nilssen-Love's bustling polyrhythms, infused with perpetual motion and resonating counter-maneuvers.

Gjerstad's scathing tonal swashes and darting lines embody a whirlwind approach. And Nilssen-Love's buoyant underpinnings offer a relentless pulse and broad foundation, where sparks seemingly bounce off the walls in concert with torrential downpours of high-strung dialogues. However, the duo lowers the pitch in spots but often execute within a multidimensional framework, topped off by Gjerstad's plaintive cries.

The duo moves with the force of a barreling freight train on "Casa," where Gjerstad's upper-register clarinet notes float above an asymmetrical, rock-like groove. The musicians exude a good deal of contrast, as they surge forward with linear progressions or tighten matters up by performing on the same plane. "Beachland" is steeped in boisterous breakouts and spiraling movements, with alternating sub-themes comprised of angst pr euphoric enthusiasm.

Raw, tumultuous, and deliberated with dissimilar timbres, the artists' passionately exercised high-octane mode of improvisation targets the neural network. It's a challenging engagement that is most definitely not for the faint of heart.

Title: Side By Side | Year Released: 2012 | Record Label: CIMP Records