Louis Moholo-Moholo Duets With Marilyn Crispell: Sibanya (We Are One) 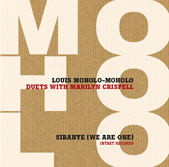 Only once in a great while does a recording come along that influences my thoughts on creativity, sound and spirituality in music. Sibanye (We Are One), duets with Louis Moholo-Moholo and Marilyn Crispell, is one of those recordings.

Confronted with the racist oppression of apartheid in South Africa, Moholo-Moholo immigrated to Europe in 1964 and became a significant influence on the direction of jazz and creative music in Great Britain and throughout Europe. Now at the age of 68, he continues to create music that celebrates the spirit of freedom while Sibanye (We Are One) also provides a critical argument in his belief that music is the "healing force of the universe."

Then there is Marilyn Crispell, who in the past year has blossomed into a new realm, reaching new spiritual levels and creative dimensions that few ever get to experience. She is an artist best heard and experienced live, but Sibanye (We Are One) might finally be the recording that reflects the power, grace and beauty of the music and spirit that is Marilyn Crispell.

Each composition begins as a journey with both musicians always intensely engaged, treading slowly and softly with uneven tempos and rhythms; at times reaching tidal wave proportions of sonorous power and emotion.

And while new duets don't always mesh, in this essential recording, Moholo-Moholo respectfully creates underlying African feels and textures while avoiding clichés, allowing Crispell to freely glide vertically and horizontally through the textured but open space. She has the gift of selecting the right note, the right color when listening to silence, painting powerful and dynamic phrases while gracefully interacting with Moholo-Moholo's rhythmic canvas.

As is the case with most great recordings, this one has an energy and intensity from the first note to the last and will remain a timeless testament to the human spirit. It doesn't get much better than this.