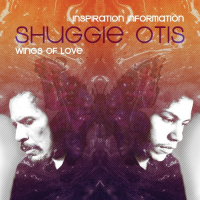 Singer, songwriter and multi- instrumentalist Shuggie Otis might not have been born holding a guitar but he probably picked his first one up soon thereafter. He did grow up playing guitar in bands led by his dad Johnny Otis, who introduced such artists as Charles Brown and Esther Phillips to R&B and soul audiences. He debuted in 1970 on Kooper Session: Al Kooper with Shuggie Otis (Columbia); when he recorded those tracks, he was just 15. His solo debut, Here Comes Shuggie Otis (Epic, 1971), produced and arranged by his dad, followed soon thereafter. Inspiration Information (Hi Horse), another mostly solo affair, appeared in 1974 but quietly and quickly fell out of print. The Brothers Johnson strapped Shuggie's "Strawberry Letter #23" into their Quincy Jones-produced album Right on Time (A&M, 1977) and rode it into the stratosphere: The single went #1 Soul, #5 Pop and the album went platinum. But except for some session work with Etta James, Frank Zappa and a few others, this was more or less all we heard from Shuggie Otis.

Although the influence of his bandleader, songwriter, impresario and Rock & Roll Hall of Fame R&B Pioneer father on West Coast blues, rhythm & blues and soul music is impossible to overstate, Shuggie Otis's legend sometimes seems even bigger because, like a comet, he gloriously skyrocketed and then pretty much vanished.

Or at least vanished until 2013, when he personally oversaw the digital restoration of Inspiration Information with four previously unreleased bonus cuts, and its combination with Wings of Love, a collection of previously unreleased live and studio tracks recorded as far back as 1975 and as recently as 2000, into a two-CD set. Combined, these two releases present an expansive survey of soul, jazz, funk, pop, blues and R&B. Inspiration Information often feels like you're submerged and swimming inside Otis' head as he contemplates mid-70s psychedelic soul, especially its title track, "Aht Uh Mi Hed" and "Island Letter," where soft keyboards wash up against wah-wah guitar like waves lapping against a sunny California beach. "Not Available" seems lifted from the Bobby Womack school of cinematic soundtracks, while "Sparkle City" moves more quickly on Otis' funky rhythm guitar and the instrumental "Rainy Day" sounds like one of Creed Taylor's pop productions of guitarist Wes Montgomery. Of the newly released bonus material, "Miss Pretty," a soulful and funky Sly & the Family Stone-type thang, and the slinky "Castle Top Jam," work best.

Wings of Love, entirely made up of previously unreleased music, offers a more mixed grab-bag of chronological snapshots, some of which ("Give Me a Chance," "If You'd Be Mine") sounds like Otis chasing the sound of 1980s pop radio. But his buttery, rubbery bass line helps "Special" sound like one more solid Brothers Johnson groove, and "Walkin' Down the Country" once again remembers the multi-layered vocal California sound of War and even The Mamas & The Papas, cast against a shuffling backbeat that rises as warmly as the dawn.

"Black Belt Sheriff," a straight-up solo acoustic guitar blues recorded at a 2000 performance, moans and groans through extended slide guitar passages that nearly drip with regret and pain, and is completely incongruous with any and everything else here.

On the other hand, the title track is Otis' Wings of Love masterpiece, a lengthy guitar jamboree, both electric and acoustic, lit up by dramatic and arching electric blue lead lines, powered by a rock ballad drumbeat—the best rock ballad that Journey (yet another California band, from San Francisco) never wrote.

Interviewed for the Inspiration Information / Wings of Love liner notes, Shuggie sounds both glad to be back and pissed that it took so long for him to get here. "If I had enough money, I could have produced another album and put it out on my own label. But I wasn't financially well off," Otis explains. "I went to record companies on a monthly basis for years and years and years and kept getting a big fat 'no' slapped in my face. I was rejected by every major record company and friends (I thought) in high places included. Even the smaller companies weren't goin' for me."

"I never had any temptation to disappear. I never wanted to be out of show business. I was forced out."

CD1 (Inspiration Information): Inspiration Information; Island Letter; Sparkle City; Aht Uh Mi Hed; Happy House; Rainy Day; XL-30; Pling!; Not Available; Miss Pretty; Magic; Things We Like to Do; Castle Top Jam. CD2 (Wings of Love): Intro; Special; Give Me Something Good; Tryin' to Get Close to You; Walkin' Down the Country; Doin' What's Right; Wings of Love; Give me a Chance; Don't You Run Away; Fireball of Love; Fawn; If You'd Be Mine; Black Belt Sheriff; Destination You!