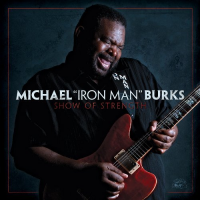 Michael "Iron Man" Burks grew up playing guitar. A quick study, he soon began leading the blues, rhythm and blues and soul house bands that backed O.V. Wright, Johnnie Taylor and other stars as they passed through the R&B circuit near his Arkansas hometown. Then, Burks put his own career aside for two decades to make sure his daughter had an attentive, responsive father.

Burks resurfaced as a "40 year old newcomer" with his self-produced debut From the Inside Out (Vent Records, 1999). Fame and good fortune were soon to follow: Burks signed with Alligator Records, one of Chicago's flagship blues labels, for whom he debuted with the highly acclaimed Make It Rain in 2001. He won the 2004 Living Blues Critics Award for Best Guitarist, and was nominated as 2012 Guitarist of the Year by the Blues Music Awards.

His fourth Alligator release, Show of Strength features more of Burks' original music than any of his previous albums and features his longstanding band: Bassist Terry Grayson, drummer Chuck Louden and keyboardist Wayne Sharp. Without exaggeration, it also moves him into some exquisite company: Blues guitarists who were just as powerful and soulful as vocalists, a pretty exclusive little neighborhood that includes Little Milton Campbell, Eric Clapton, Albert King and Jimi Hendrix but not too many others.

Burks finds profound power and depth in the simple folds of the blues form. His guitar's sprawling, squalling sound in the opening "Count on You" screams out the impact that Hendrix has on just about every blues guitarist since the late 1960s, and "Cross Eyed Woman," six minutes of aural hell, conjures all the menace of the Band of Gypsies, Hendrix' famous electric voodoo trio. Burks rides the beats of the rolling and tumbling "What Does It Take to Please You" and flat-out funny "Can You Read Between the Lines" with King's wide and friendly grin, and it's not much of a stretch to imagine Clapton whipping through "Storm Warning" and "I Want to Get You Back."

The "24 Hour Blues" is sharply produced so the snare drum pops and the electric guitar genuinely screams with pain and anger. No more or less than the honest sound of a man's blood, sweat and tears, "Since I Been Loving You" encapsulates the fury and glory of a man's lifetime, poured out in eight majestic minutes.

Tragically, it also writes Burks' own brilliant epitaph. Show of Strength proved to be the ultimate statement by the blues guitarist and vocalist known as "Iron Man": He finished recording it in April 2012 and then departed for a tour of Europe, leaving producer and Alligator impresario Bruce Iglauer to finish some mixes and sequencing. In May 2012, Burks collapsed and died in the Atlanta airport on his way back home from this European tour. He was 54.

Count on You; Take a Chance on Me, Baby; Storm Warning; Can You Read Between the Lines?; Cross Eyed Woman; Little Juke Joint; 24 Hour Blues; Valley of Tears; Since I Been Loving You; I Want to Get You Back; What Does It Take to Please You?; Feel Like Going Home.