The Seth Yacovone Band: Shovel Down 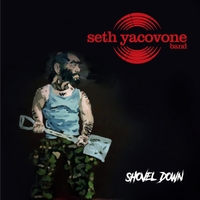 Vintage hard rock with heavy metal overtones that should appeal as much to fans of the original Gov't Mule as those of early Black Sabbath, the initial studio album by The Seth Yacovone Band 2.0., Shovel Down is the initial and fairly lofty plateau in a judicious plan by the bandleader to remain as independent as he is prolific.

Convened with no small amount of serendipity back in 2013 by three mainstays of the Burlington Vermont music scene-the guitarist/vocalist/composer namesake unites with drummer Steve Hadeka and bassist Alex Budney-the group has played regularly (but not relentlessly) since its inception to maximize the moments of inspiration they find on stage. In executing a sequence of events culminating, at least for now, with this approximately fifty-minute long-player, the trio displays as much restraint as intuition and, in so doing, manage to distill a distinct sensation of stage spontaneity into their musicianship for the duration of the album.

Recorded and mixed at the studios of Burlington's Signal Kitchen, then mastered by Lane Gibson at his own location in fairly short order, the swiftness with which Shovel Down was completed, with minimal overdubs, not only preserves that spirit of the moment, but the craftsmanship of the SYB collaboration as well. Just as the unadorned but resounding sound quality becomes readily apparent from the very start of the opener "Playing Patterns," there's a logic to the song sequence immediately evident as well (all the way to the penultimate rocker "Mr. Reed"). A tuneful tandem guitar line that functions as something of a refrain here serves as effective contrast to Yacovone's guttural vocals as well, as does the relatively muted likes of the instrumental interplay that comprises "Falling On Deaf Ears."

Like the music of these eight tunes (though not listed on the cover, a ninth called "Just Open the Door" is available on CD and download purchases), Yacovone wrote the words as well, many of which like those of "The Violent Stain of My Bleeding Heart," sound as startling in their imagery as the custom-designed graphic looks as it adorns the front cover of Shovel Down (the meaning of which title revolves around 'digging deep,' among other concepts). Given that "Mistake" suggests the man is as articulate verbally as with his guitar (and his two bandmates almost equally so on their respective instruments), it might behoove the author to make them available on-line; still, "Caveman Guerrilla" and "The Snake," among others, remind of that pleasurable compulsion to listen repeatedly to a given song just to figure out the words.

It does not in any way disparage the work of The Seth Yacovone Band here to say the highest compliment to pay Shovel Down might be that it will only enhance the frontman's stature via his various other projects including the collaborations he spearheads or to which he contributes: his ongoing blues trio, homages to the Grateful Dead in the form of Blues For Breakfast and The Dead Sessions plus a band devoted to the music of Bob Dylan, The Jokermen—not to mention his perpetual appearances playing acoustic as a solo artist (within which is his 'Album Cover Series' where he plays a chosen artist's album in its entirety). Then again, to observe how this material evolves over the course of time SYB plays it during their live appearances should only reflect on the stable foundation it erects for their future.