By DAVID RICKERT
December 28, 2011
Sign in to view read count 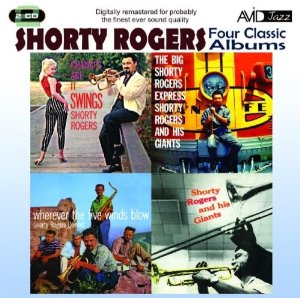 Trumpeter Shorty Rogers was one of the few jazz musicians to embrace the big band sound long after the commercial appeal for the genre was over, and despite the lack of commercial viability, he produced a series of terrific albums in the 1950s. Part of his success was due to the large pool of studio musicians on the West Coast who also happened to be terrific jazz players; they were comfortable in larger ensembles while also relishing the opportunity to solo. But a larger part of the success was due to Rogers' determination to create some of the warmest, accessible jazz music out there. Four Classic Albums collects a quartet of classic albums from the 1950s, three with the big band (dubbed "the Giants") and the fourth, one of the few quintet records Rogers ever made.

The Big Shorty Rogers Express features the trumpeter sitting on the front of a locomotive, an apt metaphor for the album, which barrels along steadily and brazenly. The album captures sessions from 1953-56, and it's arguably Rogers' best record, all bright and assertive, as if the bandleader had found a way to capture the West Coast weather in the studio. There are five trumpets and three trombones on the stand (as opposed to the four saxophones) and the brassy sound gives the charts a powerful punch, but the secret weapon is the French horn of John Graas, who in addition to adding color frequently gets an opportunity to solo. While the music can at times be a little over- caffeinated, for the most part these are very satisfying (and whimsically titled) tracks that are some of the best jazz to come from the West Coast.

Shorty Rogers and His Giants is very similar, an early record filled with the same youthful enthusiasm and overflowing with interesting ideas. The line-up and musicians are of similarly high quality; you can tell that everyone has eagerly bought into the Rogers sound and the arrangements make good use of the talented bandstand. Solos are plentiful yet brief, and gifted sidemen like Graas and reed players Jimmy Giuffre, Art Peppermake the most of the haiku-like space they are allotted. In between the standard charts there are a few Latin numbers (a motif that Rogers would explore on full- length records in the future) as well as stereotypical junk such as "Indian Club" that so many bandleaders felt compelled to record. An arrangement of "The Lady is a Tramp" is a particularly astounding bit of recasting of the familiar song.

Wherever the Five Winds Blow from 1956 is a rare quintet outing for Rogers, and a concept album of sorts, with five songs based on a particular type of wind. The songs allow for lengthy, leisurely soloing, not one of Rogers' strengths, but he acquits himself nicely in the midst of more able-bodied soloists such as Giuffre, who doubles on sax and clarinet and an animated and jovial Lou Levy on piano. What carries the record are the songs, all Rogers compositions, which seem at once like something heard before yet with a novel twist due to crafty arrangements (Giuffre, no slouch as an arranger himself, probably had a hand in it as well.)

Chances Are, It Swings is a pretty good motto for approaching any Rogers album, and this one doesn't disappoint. This recording from 1958 features Rogers and a whopping 21-piece band on charts of songs by Robert Allen, a composer who had a series of hits for singers Perry Como and Johnny Mathis, but has since slipped into obscurity. Many of these songs would have been familiar upon release and are ripe for rediscovery. There's a little more polish on this record compared to the earlier ones; very little of the careening off the tracks enthusiasm of Express is here. Rather, the songs seem like typical Hollywood studio work, the kind of big band charts that might be background for a movie from the time, albeit ones filled with bluster and brashness. Rogers has added guitar and vibes into the mix, adding a softer tone that he can play off of the horns for dramatic effect. This is an album that reveals its best moments slowly, and there's no question that Rogers was up to something pretty novel at the time, creating the template for how the big band could sound mid-century.

Four Classic Albums collects some of Rogers's best work for MCA, some of which has been difficult to locate for some time. Here's hoping some of the Atlantic material will emerge someday as well.

Tracks: CD1: Blues Express; Pink Squirrel; Coop de Graas; Infinity Promenade; Short Stop; Boar-Jibu; Pay the Piper; Home With Sweets; Tale of an African Lobster; Contours; Chiquito Loco; The Sweetheart of Sigmund Freud; Morpo; Bunny; Powder Puff; Mambo Del Crow; Joycycle; The Lady is a Tramp; The Pesky Serpent; Diablo's Dance; Pirouette; Indian Club; The Goof and I; My Little Suede Shoes. CD2: Hurricane Carol; Breezin' Along in the Trades; Marooned in a Monsoon; The Chinook that Melted My Heart; Prevailing on the Westerlies; Chances Are; No Such Luck; It's Not For Me to Say; Lilac Chiffon; I Just Don't Know; Who Needs You; Everybody Loves a Lover; Come To Me; My Very Good Friend in the Looking Glass; You Know How It Is; A Very Special Love; Teacher, Teacher.