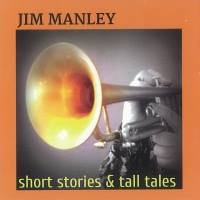 Back in the 60s, there was a classic James Bond film starring Sean Connery entitled Goldfinger (United Artists, 1964). The key antagonist in the action-packed film was a character named "Auric Goldfinger." He had less than the Midas touch. Conversely, St. Louis-based trumpeter Jim Manley does indeed have that touch as he shines on Short Stories & Tall Tales.

With these stories and tales, Manley sends up a series of high-energy selections which run the gamut from Tower of Power funk ("She's in My Orbit") and electro-funk ("Holes in the Story," "Ur Soul Funky") to smoother elegance ("Dreaming Out Loud," "Along for the Ride") and habanera-hot Latin ("Last Call" and the quirky "Sparky's Tune"). With a neat production twist and awesome display, the talented Manley composed all the selections, performs and overdubs all of the melodic instruments—trumpet and flugelhorn, valve trombone and keyboards—over pre-recorded base material. The interplay is uncanny—and quite good.

First and foremost, Manley, who travels the horn's altissimo range with the flair of a whizzing razor-edged fedora, is a stellar trumpeter with spectacular chops and a gorgeous, inviting sound across his axe. As a soloist, Manley leverages his awesome range and trumpet skills to fly high—and low on the larger horns—over the driving rhythms below. However, Manley is shrewdly aware of the difference between ennui-inducing showing off and solid music-making—be it melody or improvisation.

Short Stories & Tall Tales also demonstrates that Manley has his finger on the pulse—and literally the console—of today's recording technologies. His performance across the date was individually produced with Manley recording over a rhythmic and harmonic bed of royalty-free loops drawn from cyberspace—and then handling the back-end mix with the savvy of Bond's "Q"—or, perhaps the other more musical one.

As was the case with his previous more traditionally- generated efforts, Short Stories & Tall Tales validates Manley as a superior trumpet artist, fine soloist and a production savant. If the Bond folks ever decide re-make Goldfinger, they wouldn't have to look farther than "Double-High 7" for the sounds. He packs heat and has a 24K license to thrill.

Short Stories & Tall Tales; Last Call (What the Hell?); Holes in the Story; Skating on Thin Ice; Dreaming Out Loud; Shout It Out; Sorry to Say; Sparky’s Tune; Ur Soul Funky; Along for the Ride; She’s in My Orbit; State of Confusement; When You Least Expect It; Where Did It All Go Wrong?