By DAN BILAWSKY
December 26, 2014
Sign in to view read count 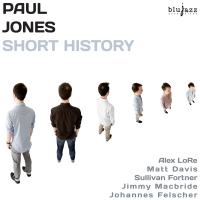 Saxophonist Paul Jones clearly brings a literary bent to his music. This, his debut album, is built largely around original material that takes inspiration from great written works like Jack Kerouac's On The Road (Viking Press, 1957), Charles Bukowski's Women (Black Sparrow Press, 1978), and Bill Bryson's A Short History Of Nearly Everything (Broadway Books, 2003). And while the music is strong enough to stand apart from said literary models, one of the most fascinating aspects of this album has to do with the way Jones captures or twists the thoughts and themes laid out in the written words of various authors.

Short History opens with the flowing tranquility of "Women," but the gentle lapping of the sonic waves turns into something more heady, as simple pleasures lead to more complex ideas in Bukowski-esque fashion. That section of music segues into an up-tempo swing feel with bop-based allusions and tussling voices coming forth during Victor Lewis' "Hey, It's Me You're Talking To," but it's those initial musical thoughts of "Women" that remain firmly planted in the mind. A bit later, there's an appropriately exhausting and repetitive drive behind "On The Road," as pianist Sullivan Fortner and drummer Jimmy Macbride lay down a persistent straight eighth groove in seven, but clarity of thought comes forward when guitarist Matt Davis parts the musical seas and clears out the stifling air. It's Jones capturing that moment when the tedium of the road leads to deeper thought and understanding.

As the album continues, Fortner fronts a contemplative salute to The Inner Game Of Tennis (Random House, 1974), Richard Rogers' "I Could Write A Book" gets a facelift, and Jones enters Ayn Rand territory with the sly "Fountainhead." It's that last number, built as a piano-less trio piece, that proves to be Jones' standout performance on the album. He skulks, swoops, struts, soars, and sings his way to victory there.

Short History manages to do what all strong debut releases should: it captures the musicality, passion and promise of a talented artist at the dawn of his career.

Women/Hey, It's Me You're Talking To; Let's Go; On The Road; Short History; The Inner Game; I Could Write A Book; Fountainhead; At The Lighthouse.