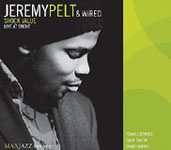 Imagine a sacred Shinto sand garden beautifully divided up into all of the genres of jazz, rock, and blues. Interconnections between the genres and subgenres are carefully documented, after having been fully researched and verified. Now visualize trumpeter Jeremy Pelt dragging his horn through this garden, marginally alongside a similar set of tracks left by Miles Davis thirty-five years ago. This provides a visual image of Jeremy Pelt and his band WiRED at their March 21-22, 2007 appearance at New York City's Smoke.

Pelt is one of the few trumpeters exploring Miles' post-In A Silent Way (Columbia, 1969) period, as opposed to the majority of leaders who have been content to mine the master's second great quartet period. In fact, Pelt and his band sound very much like Miles' transitional combo heard on Live at the Fillmore East (March 7, 1970): It's About That Time (Legacy, 2001), that featured Chick Corea, Dave Holland and Jack DeJohnette, except Pelt is way better behaved and more enjoyable to listen to.

The disc is comprised of Pelt originals, with one exception, all very different, all very compelling listening. The highlights are a lengthy blues where Pelt has no fear of playing his horn through a compression-wah pedal. Pelt's solos, along with guitarist Al Street, make this blues less about jazz and more about blues. It is a nice throw-back touch in a more forward-looking program of music.

Pelt follows the blues with the hypnotic "Suspicion, where the band solos over a very simple harmonic figure repeated over and over, recalling Miles lengthy electric funk excursions. Pelt shares composing duties with vocalist Becca Stevens, who provides lyrics to Pelt's "Cause. The musical effect is narcotic and the sound, performance and approach fresh. The ballad "Beyond, by Derek Nievergelt, shows Pelt more than capable of the straight-ahead. In all, a superb disc by a young artist.