Shock and Awe: Azar Lawrence Drops "The Seeker" On Dizzy's 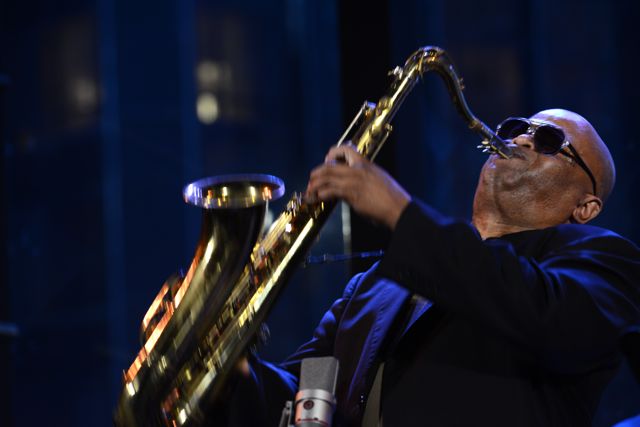 By CHUCK KOTON
October 7, 2014
Sign in to view read count

The music this band plays recalls the 'fire music' Lawrence inhaled during his many years in McCoy Tyner's band. &#151Chuck Koton

There ain't no denyin' that jazz is best heard "live." Ideally, the band is playing in a club equipped with quality sound and lighting systems, staffed by experienced people who are respectful of the music (especially bartenders who try to avoid running the drink mixers during bass and piano solos) and managed by someone who not only sees to it that the players are properly introduced but also always reminds the audience to keep the chatter subdued, so as not to disrespect the performers. In such an ideal environment, a hip and enthusiastic audience can interact with inspired jazz musicians to create a truly sublime musical experience.

All of these conditions were met at Dizzy's Club Coca Cola when tenor and soprano saxophonist, Azar Lawrence, played four sold out nights at Dizzy's, occasioned by a CD release party for The Seeker (Sunnyside, 2014), recorded live at the Jazz Standard. The gig offered visceral and indisputable evidence of the emotional and spiritual power of live jazz.

Lawrence, who has been traveling on a personal journey in search of truth and beauty through music since he was a young man, opened his performance (he was joined by the same group who played on the recording, save for veteran trumpet master, Eddie Henderson, who replaced Nicholas Payton for this gig), with an original composition, "Gandhi," inspired by the legendary Indian seeker of peace and freedom. This modal burner instantly signaled the band's serious intentions to the audience; this was going to be a "hold on to your hats" wild ride. Lawrence blew a forceful snake charmer riff on tenor before stepping aside to give the rhythm section some space. The heavy, percussive quality of pianist Benito Gonzalez' playing immediately recalled the sledgehammer left hand of McCoy Tyner, a fundamental influence not only on Gonzalez, but also Lawrence, whose big break in jazz came when he joined Tyner's band in 1973, and with whom he toured and recorded for six years. Then, Henderson strode to the microphone and blew a minimalist and gentle solo that provided appropriate contrast to the band's surging power. Then Lawrence returned, blew chorus after breathless chorus, and left everyone in need of a drink.

On "One More Time," a Benito Gonzalez composition, the highlight was, unquestionably, the rhythm section's 10 minute improvisatory excursion. With a diamond cutter's finesse, exuberant spirit and a dominatrix's talent for restraint and unbridled power, these three cats rocked the room. Taking the first solo, Gonzalez, head, torso and hands a blur of motion, nearly ascended off the piano bench as his supple fingers pounded rumbling chords out of the eighty eight keys. Next, long time fixture on the NY scene, bassist Essiet Essiet, not content to merely pluck the strings, put on his own jaw-dropping display of rhythmic prowess by punctuating his beats with dramatic bass slaps. Finally, drummer Jeff "Tain" Watts took over. His "Tainness" built up the tempo and intensity slowly, but soon he was "droppin' bombs" and beatin' the drums and cymbals as if they were covered with the face of a grade school teacher who'd punished him for tapping on his desk. All the while, a beatific smile beamed from his sweat-drenched face. Yeah, while these cats were "workin,' steamin,' and cookin,' the audience was finger snappin' and head boppin' in spirited unity.

The band slowed down the pace with "Rain Ballad," a stirring plea to the heavens that opened with Watts' dramatic bass drum mimicking distant thunder, followed by shimmering cymbals that simulated life-giving, falling rain. Then Lawrence, like a rain god, answered the prayer with his lush tenor tone and Dr. Henderson reached into his "medical" bag for a mute, then blew with barely enough air to coax the sweetest sounds from his horn. The cats left no doubt they could jam in a "sweet and lovely" style, too. Next came the title tune, "The Seeker," a medium tempo compositon by Lawrence that conjured up images of child-like innocence and joy, like the feeling of awe experienced on a first walk through a garden abuzz with the spectacle of life in spring time. Lawrence, on soprano, sounded like the pied piper leading the children on a journey of discovery. Eddie Henderson called on his six decades of experience to blow a solo that employed the trumpet's entire range of tones from sweet and "midnight blue," to hot and bright. Behind the horn soloists, Gonzalez, Essiet and the irrepressible Watts drove the rhythm relentlessly.

Lawrence, who has been paying his dues (for a second time) over the last ten years, has really hit his stride with this 5 star recording. His command of both the tenor and soprano saxophones and the locomotive energy with which he imbues his playing, reveals a mature artist at the height of his creative power. Equally important, Lawrence has surrounded himself with a like-minded group of musicians with whom he has played long enough to develop the kind of organic unity that is no longer as common as it once was. The music this band plays recalls the "fire music" Lawrence inhaled during his many years in McCoy Tyner's band. Such compelling and rhythmically potent music, though all too rare a sound on today's jazz scene where younger, classroom trained musicians have often embraced unusual time signatures and esoteric sound palettes, continues to inspire Lawrence on his ongoing quest for enlightenment.