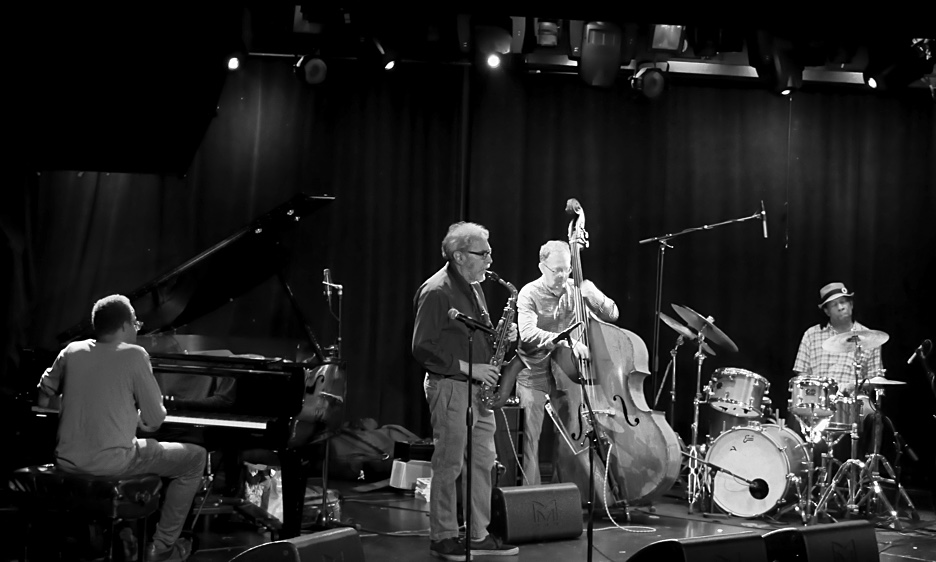 Bring together Matthew Shipp, Newman Taylor Baker, Allen Lowe and Kevin Ray and you have more than an inspired music event; this is a living history that—by professional extension—covers the study of the earliest American music to the creation of the most modern creative jazz. On August 11, 2018, Le Poisson Rouge in New York's Greenwich Village played host to Shipp/Lowe/Baker/Ray, a cooperative group that formed in 2017.

Shipp, a Delaware native who has been a New York City resident for more than thirty years, needs little introduction having come to prominence in the 1990s as part of the David S. Ware Quartet. Best known as a free jazz/avant-garde composer and pianist, Shipp's body of work as a leader is as diverse as it is deep and he has incorporated electronics, hip hop and classical elements into his inimitable modern creative music. Shipp-led groups have included such luminaries as William Parker, Mat Maneri, Wadada Leo Smith, Hamid Drake, Joe McPhee, Susie Ibarra, Evan Parker and Roscoe Mitchell. An extensive share of Shipp's catalog is dedicated to recordings with Brazilian saxophonist Ivo Perelman, beginning with Bendito Of Santa Cruz (Cadence Jazz Records, 1997). During Shipp's long tenure with Thirsty Ear Records, he served as both a prolific artist and the label's Artistic Director.

Gerald Cleaver had been the planned drummer for this show but due to scheduling conflicts Baker stepped in and excelled as a late replacement. Following the show Baker told me that he is undaunted as an eleventh-hour, go-to resource since being called on for that role with the Heath Brothers in his early Philadelphia days. The percussionist has worked with Henry Threadgill, Billy Bang, Henry Grimes, Leroy Jenkins among other notable progressive artists, and has collaborated a number of well-known choreographers. His solo percussion release, Drum -Suite—Life (Innova, 2010) drew wide critical praise for its inclusion of global influences and a broad, inventive array of styles.

There are few facets of the music world that haven't been mastered by composer, saxophonist, and occasional guitarist Allen Lowe. He has recorded with Roswell Rudd, Julius Hemphill, Don Byron, David Murray, among others, written four historical books on early music, worked in sound restoration and served as the former Director of Jazz New Haven. His three-disc box set Blues & the Empirical Truth (Music & Arts Programs, 2011) featured Shipp and other jazz greats.

Bassist Kevin Ray has recorded or played with John Stubblefield, Oliver Lake, Greg Osby, Andrew Hill, Marty Ehrlich, Elliott Sharp, John Hicks, Hamiet Bluiett and Nels Cline. Ray has performed in the premieres of works by Joe McPhee, Leroy Jenkins and others. His most recent recording as a co-leader was with Frank Lacy and Andrew Drury on the live 10³²K trio release, That Which Is Planted (Passin' Thru Records, 2013). Shipp and Ray have a further connection to Lowe having appeared together on the saxophonist's Constant Sorrow label releases Ballad for Albert, We Will Gather When We Gather, I Alone: The Everlasting Beauty of Monotony (all 2015) and Mulatto Radio: Field Recordings 1-4 (2014).

Shipp/Lowe/Baker/Ray performed four spontaneously improvised and untitled pieces over the course of approximately ninety minutes. With the exception of Lowe's introductions of the members, the music was uninterrupted. Ray opened the set with a bass solo before the rest of the group jumped in, quickly ratcheting up the intensity. About twenty minutes in, the quartet settled down to some gentler solo time, the group rejoinder momentarily taking on an ethereal air. Baker's brilliant solo began the second piece and the overall feeling was loose and free. Lowe's saxophone alternated between viscous and subtle and Shipp alternated nuance with thundering grooves and scorching improvisations. Ray again led in the third number, this time with a beautiful extended solo on a piece that had him alternating between plucking and the bow. The closer features Lowe's brief initial solo which morphed into a duet with Shipp. Here, Baker demonstrated that no part of the drum kit is off limits as he tapped, rapped and turned loose waves of sound.

There is not a method that this quartet hasn't long mastered but technique did not overshadow musicality in this show. While there were moments of obsidian forcefulness, these were welcome as a balance to some amazingly sophisticated and measured free improvisation. These accomplished and imaginative musicians have not been working together for long (in Baker's case, not at all) so it is a testament to their understanding of subtleties and their overall musical experience that made this Le Poisson Rouge performance a remarkable outing. The group—presumably with Cleaver on drums—is likely to offer some recorded music in the future. Let's hope that is the case.