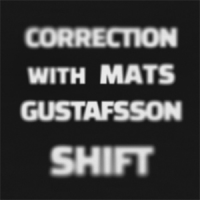 In terms of references, Portugal's acclaimed RED Trio comes to mind, although Correction is if anything more muscular in its angular attack. Bergström proves a percussive pianist, often dampening the strings, to unleash insistent gamelan like patterns. But his inspirations range widely, as his avant funk gooses the reedman's abrasive baritone on the opening "Looking up. Birds," while his chordal promptings take on a Latin feel on "Winters Within." Åstrand-Melin contributes a distinctive dry tonality, reminiscent of Milford Graves, accentuated by his minimal use of cymbals, which meshes well with Nyberg's woody propulsion. Even in the improv-orientated "Correct This!" they still conspire to maintain a pulse.

Each of the seven pieces unfolds in the moment, the product of egalitarian interplay in which solos emerge organically as the limelight shifts easily around the group. Gustafsson plays a leading role: "Personal Note No.3" begins with the saxophonist matching the drums in explosive bursts. That same combination ends the nervy momentum of "Four Is a Sufficient Condition for Amendment" in a stop/start stutter. While all the preceding cuts might be excerpts from a single extended recital, the title track offers a striking contrast: a spare ballad graced by breathily ruminatively baritone, creating a strong but atypical close to the album. On this showing Correction will be a name to follow for many years to come.

Looking up. Birds; Winters Within; Personal Note No.3; Four Is a Sufficient Condition for Amendment; Correct This!; A New Ghost; Shift.