Shibusashirazu is bound to challenge preconceptions about Japanese jazz and free jazz in general, especially those unaware of how funny it can sound and how entertaining it can be. 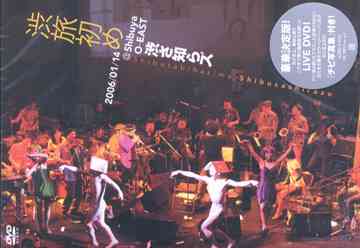 There's no other ensemble like the Shibusashirazu (loosely translated from Japanese as "never be cool"). It's not only the huge number of musicians on stage (more than thirty including dancers and one painter), but also the breadth of its stylistic spectrum. Think of the manic energy of any of Peter Brotzmann's outfits, add Steven Bernstein's Sex Mob inclination to disassemble pop songs and reassemble them as avant-garde improvisations, inject some vivid arrangements that sound borrowed from Klezmer or Balkan wedding band music, flavor it with the extravaganza of progressive rock bands, mix in the Japanese equivalent of country music, Enka, and stir it with tons of Japanese eccentric humor. Now imagine this enormous sonic mammoth improvise on themes of popular TV action series, but real fast, in front of half naked Butoh dancers and two beautiful go-go dancers, with MCs who keep encouraging the audience to take an active role in this experience. And don't forget the 15-meter-long flying dragon. Now you begin to come close to what it is to be in Shibusashirazu concert.

Shibusashirazu was founded ten years ago by bassist/composer Daisuke Fuwa, the conductor or dando-list, as he is called in the Shibusashirazu lingo. In its early stages it provided music for avant-garde theater productions of the Hakken no Kai group. Later it evolved into a large-scale orchestra that features some of the most outstanding improvisers in the Japanese jazz scene, such as tenor saxophonist Hiroaki Katayama and violin player Yuji Katsui, who are still on board. The orchestra in its many incarnations featured many other notable Japanese musicians as guest players or as members— baritone saxophonist Ryuichi Yoshida, pianist Satoko Fujii and trumpeter Natsuki Tamura, guitarist Kazuhisa Uchihashi, as well as such foreign luminaries as sax players Marshall Allen, David Murray, Alfred 23 Harth and James Chance.

The repertoire of the orchestra remains quite limited, but the arrangements and the performances are different in every concert. You can count on Shibusashirazu to always surprise you, either by their selection of covers—The Doors ("Light My Fire," sung in Japanese), Deep Purple ("Highway Star" in a super fast version that would have made Ritchie Blackmore gasp mid-song if he would have to compete with Shibusashirazu's guitarist), King Crimson ("Red") or Sun Ra ("Space Is The Place"), or simply by its carnivalistic nature of the shows.

So it is obvious that Shibusashirazu is an outfit that must be experienced live, even though the orchestra keeps releasing fine recordings. And since it has not toured outside Japan since 2005, the poor man's alternative is the excellent DVDs that offer a decent taste of a typical Shibusashirazu concert. This one, the latest, features the orchestra at its best before an enthusiastic audience in Shibuya O-East hall in Tokyo.

First thing that you notice is that the stage arrangements are nowhere close to the customary ones with such big bands. The players are not grouped according to their instruments, and you can find violin player near tenor saxophonist near drummer near guitarist near trumpeter, all almost touching each other on the crowded stage. Second thing, is the relatively high number of women players in the orchestra—about a third of all players, more than in most Western jazz ensembles. Fuwa seems like the happiest man on the planet, smoking most of the time and smiling the rest of time, while coordinating the orchestra with economical gestures.

You sense how wild this ride is going to be from the first seconds. Katayama takes the lead with a fantastic, masculine-quality Coltrane-ish solo in the opening "New Gate," amid a full-horn assault that keeps repeating a simple theme and frenetic go-go dancing by the Butoh dancers. And just as the orchestra settles on an uplifting groove, it changes course, and a gentle duet between the violin of Katsui and the baritone sax of Akira Kito moves the orchestra forward into a free-wheeling jam. Then Katayama takes control again and brings this energetic piece to its coda through a guitar duel between Hiroyuki Otsuka, who enjoys demonstrating all the Hendrix gestures, including playing the guitar with his teeth and behind the back. Then there are the manic moves of Ryoichi Sato, whose windmill fretting should be familiar to anyone who has watched clips of Pete Townshend, but this is ten times faster.

But this almost thirty-minute opening is just the appetizer: Shibusashirazu explodes in the following "Mattapan," a festive mix of genres, a reggae beat with generous doses of steroids with East-European folk- dance arrangements that highlight a surprising series of lyrical solos by Keisuke Ota on the electric violin, Yochihiro Kita on the pocket trumpet and the most inspired one by Keiko Komori on the soprano sax, before the whole Shibusashirazu burst into a wild improvisation. The Butoh dancers, in case you wondered, were busy showing their ability to walk straight with open books on their shaven heads.

Now, an hour into the show, Shibusashirazu are warm enough to perform one of their favorites, "Hyottoko," an orgiastic dance piece, with another amazing manic guitar solo by Saito followed by a string of fast horn solos, which suddenly is cut by baritone saxophonist Kito, who trades humorous solos with the rest of the horns, including a sweeping train-a-coming harp solo by Yoshiyuki Kawaguchi (who clearly pays his dues to the late Paul Butterfield) and followed by a dazzling electric violin solo by Ota that sounds inspired by the early days of the Mahavishnu Orchestra, til all unite for a powerful repetition of the theme.

Ultimately, Shibusashirazu slows down with an emotional performance of "Theme of Inuhimae," featuring alto saxophonist Hideki Tachibana in a burning solo, guitarist Otsuka with a feedback-laden slow blues turn and another impressive solo by Katayama. Shibusashirazu can even be romantic and touching, as on the following ballad "Song of Dorokazoku," which feature the women in the orchestra—Aya Murodate and Mari Sekine on vocals, Sachiko Nakajima on the keyboard and Komori on the soprano sax.

Wild and fascinating, this DVD delivers two and a half hours of sheer sensual joy. Shibusashirazu is bound to challenge preconceptions about Japanese jazz and free jazz in general, especially those unaware of how funny it can sound and how entertaining it can be.

Visit Shibusashirazu on the net.

For photos of a live show see Shibusashirazu Performs.