Peripheral Vision: Sheer Tyranny Of Will

By BRUCE LINDSAY
October 4, 2014
Sign in to view read count 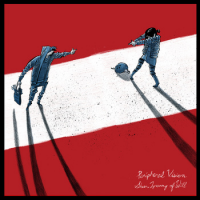 If titles are anything to go by, then Canadian quartet Peripheral Vision has a pretty pessimistic world view—if Sheer Tyranny Of Will isn't downbeat enough, "Robbed And Ridiculed," "The Ill Conceived Plan" and "Neurosis And Everyday Life" add further evidence to the pile. Maybe it's circumstantial though: tucked away in the track listing is one of 2014's most wonderful tune titles—a band that performs a number called "Charleston Heston" can't be too downhearted, can it?

Bassist Michael Herring and guitarist Don Scott are the writers on this third Peripheral Vision album—saxophonist Trevor Hogg and drummer Nick Fraser complete the quartet which has kept the same line-up since its formation in 2008.

"Robbed And Ridiculed," a Herring tune, shows the band at its most energetic and offers a chance to each member to stretch out and demonstrate their chops. There's something of early-to-mid period King Crimson about it: Peripheral Vision are not the first band in 2014 to bring that comparison to mind. Herring's "Wiretap" is also full of energy—particularly Fraser's edgy drums—but this time there's a modern jazz sensibility at play until Scott's coruscating guitar emerges. The sudden shift in mood and style around the four minute mark comes as something of a shock, Scott's guitar playing becoming much more lyrical and melodic.

In between the post-bop style and classic rock energy come the twists and turns of Herring's "Neurosis And Everyday Life," the dramatic tension of Scott's "Cement Watchers" and the irresistible forward motion of Herring's "The Ill Conceived Plan." Scott gets the composer credit for "Charleston Heston." The tune's light, quick and fluid melody is notably upbeat, its positivity thanks in large part to the composer's sparkling guitar. The title track and closer "Patina" would benefit from tighter editing—both tunes are over ten minutes long and lose focus midway—but as a whole these are well-crafted compositions, giving Sheer Tyranny Of Will the feel of a cohesive work from a mature yet still innovative band.