Chet Baker: She Was Too Good To Me 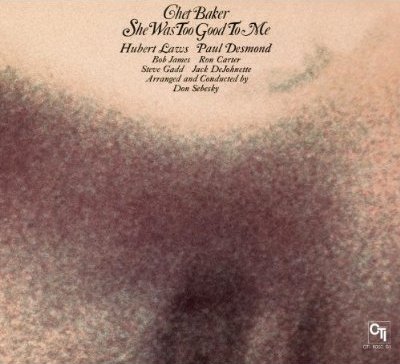 Newly reminted in 2010's CTI Masterworks series, She Was Too Good To Me was originally Chet Baker's 1974 "comeback album," his first recording since a well-publicized mugging by junkie acquaintances (hardly "friends") that relieved the singer and trumpet player of his money, dope and most of his teeth. "Believe me," Baker once observed, "when a trumpet player has his teeth pulled, it's a comeback."

Creed Taylor's velvety production proves the perfect setting, and the standards "Autumn Leaves" and "Tangerine" prove that Paul Desmond's dry and airy alto saxophone is the perfect instrumental foil for Baker's tropical (steamy and lush) trumpet and vocal romanticism. Don Sebesky's arrangement tailors "Autumn Leaves" toward the poignant and melancholy, darker shades of Baker's trumpet, and shapes them as emotional counterweight to the more cerebral, crystalline sounds of Desmond's alto and Bob James' electric piano, all within a rhythm that seems to both float and swing. Baker's solos in "Tangerine" seem to neatly meet the ballad styles of Miles Davis and Freddie Hubbard halfway, while bassist Ron Carter moves its rhythm with stealthy, cool funk.

Taylor's production and James' keyboard also polish Hank Mobley's cool melody "Funk in Deep Freeze," equal parts bop and blues, to an icy sheen beneath Baker's trumpet, tethered between walking in space and walking the blues. In "It's You or No One," Baker's trumpet jumps and pops.

Just like "Autumn Leaves" plays to his trumpet, the palpable longing of "She Was Too Good To Me" seems so appropriate for Baker's vocal delivery—worn and weary, singing just as much to himself as to you, lingering almost too long on each word and thought. His vocal phrasing—the way he ends a verse to blend in with the beginning of the next, for example—aches like singer Frank Sinatra in a blue mood, which is to say it is sheer vocal genius. In the closing, wistful "My Future Just Passed," Baker's voice and trumpet both sound so happy to be so sad.

It is irresistible to wonder if the closing, wistful "My Future Just Passed" might also have been Baker's own commentary on the potential that his sometimes dissolute life left unfulfilled.

Autumn Leaves; She Was Too Good To Me; Funk in Deep Freeze; Tangerine; With a Song in My Heart; What'll I Do: It's You Or No One; My Future Just Passed.

Title: She Was Too Good To Me | Year Released: 2011 | Record Label: CTI Masterworks