Geoff Vidal: She Likes That

By LEONARD EPSTEIN
December 8, 2010
Sign in to view read count 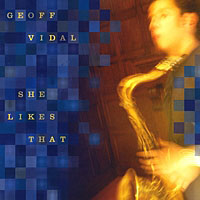 Combine Sonny Rollins, Chris Potter and Joe Henderson, and mix it with some exciting originality you'll arrive somewhere near Geoff Vidal. Vidal, who regularly can be heard in New York West Village jazz haunts such as Fat Cat, debuts his first album as leader, She Likes That. This seven-composition set consists of all original music, penned by Vidal or his guitarist, Joe Hundertmark.

ADVERTISEMENT
Vidal's compositions are ripe with jazz tradition, yet employ contemporary fixtures such as odd meter, metric modulation and angular thematic material. Many of the compositions start with Vidal solo, or accompanied by drums, reminiscent of the great Sonny Rollins. His improvisational lines are fresh. The rhythm section is tight and provides dynamic support throughout all improvisations. Overall, She Likes That, is an enjoyable program of music.

Vidal pays homage to the great tenor sax legacy before him, but is never consumed by it. He presents an original and exciting new voice on the tenor saxophone with this debut. Hopefully there will be a follow-up release from this group in the very near future.