The Uptown Jazz Collective: She Do What She Do 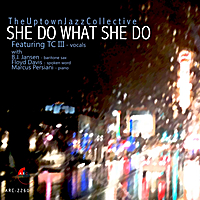 The Uptown Jazz Collective is a muscular, energetic band that mixes some serious messages with some seriously good time grooves on She Do What She Do.

The Ensemble is led by two baritones: saxophonist BJ Jansen and vocalist William Theodore Carney III, aka t.c. III. The pair is backed by some strong rhythm playing, while pianist Marcus Persiani also delivers some creative lead work. Jansen's strong on the raucous R&B style of baritone playing, but he's also able to create subtler tones, with a warm romanticism to his solo on Jerome Kern's mournful "Yesterdays."

T. C. III's rich baritone voice is The Collective's defining feature. He sings, scats and occasionally wails with a passion, projecting this love of and enthusiasm for the music across the speakers. It's a style that works extremely well on Bobby Timmons' "Moanin'" and on T. C. III's own "She Do What She Do," a bluesy shuffle presented in two versions. Version one is the faster take, version two is sassier—both feature some fine playing from Jansen and Persiani and a juicy though too brief bass solo from Mike Boone.

"Real Talk" is a conversation between Floyd Davis, (presumably) T. C. III and Jensen, in which the three men discuss their roots. The topic flows neatly into the slinky "Latin" where the theme of roots is revisited by Davis, but the conversation interrupts the mood that's been created by the music.

The spiritual heart of She Do What She Do is "Psalm 150," written by T. C. III's mother, Trudy Pitts, who died soon after the album was recorded. Drummer Emanuel Harrold is outstanding here, rhythmically creative while giving the tune its center. T.C. III's performance is respectful and affecting, a contrast to his work on the more upbeat numbers and a tribute to his versatility. She Do What She Do was produced by its core trio of Jensen, T. C. III and Persiani. It signals a creative partnership that's worth watching and listening for in the future.

Title: She Do What She Do | Year Released: 2011 | Record Label: ARC - Artists Recording Collective

About The Uptown Jazz Collective