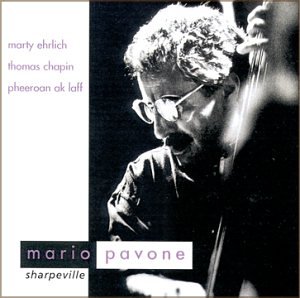 This reissue of bassist Mario Pavone’s self-produced 1985 session is an opportunity to hear creative music just as it was breaking into what we now call the ‘Downtown’ scene. Both Thomas Chapin and Marty Ehrlich were in their early thirties and had yet to make a name for themselves as leaders. As it appears that the famed Knitting Factory will soon close, the phenomena it spawned (or more accurately took undeserved credit for), had its roots in the jazz rebels of the 1960s and 1970s.

Of course Mario Pavone was a product of the creative NY loft scene that survived the dark ages of jazz/rock fusion. Thomas Chapin and Marty Ehrlich came along will truckloads of talent, and energy just as the Downtown scene was moving back into clubs. This recording, although 15 years old, directs you straight to that scene but also recalls two pioneers Charles Mingus and Rahsaan Roland Kirk. Pavone, like Mingus before him, is a powerful force at the bass. The three solo pieces recorded conjure Mingus and well, Pavone. Like William Parker, Pavone has a strong presence (both spiritually and physically) at his bass. He would go on to anchor the groups of Thomas Chapin, who died of cancer in 1998. But all the element of their sound is present here: the quick changing ideas, the stop/start approach, and the gentleness of sound. Pairing Ehrlich with Chapin was, on flute, like pairing Rahsaan Roland Kirk and Eric Dolphy. Ehrlich even pulls out his clarinet for the final track's workout. The title track adds Mark Whitecage, Peter McEachem and John Betch for what seem to be a preview of Pavone’s compositional and arranging talents that he later displayed on his excellent New World Records discs Toulon Days and Song For (Septet). The energy level of this never dissipates. This is a wonderful reclamation of an out-of-print gem.