By DAN BILAWSKY
August 7, 2011
Sign in to view read count 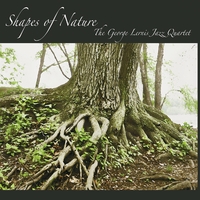 The lower portion of the tree that adorns the cover of George Lernis' Shapes Of Nature can be viewed as a metaphor for the Cyprus-born/Boston-based drummer's music. The seven compositions that make up this recording have firm roots in the rich soil of jazz tradition, but as they grow, they branch out in unexpected ways, just as the tree grows beyond the cover. While man and nature each build things in far different manners, both demonstrate a certain logic in their creative choices and Lernis, learning from both, leans on the idea of organic interplay along with solid forms that serve specific functions.

Alto saxophonist Scott Boni's melody lines often act as a GPS unit, guiding the band to hit, steer and turn in tandem, but he never steals too much of the spotlight. In fact, Lernis spreads the solos around in generous fashion, giving each band member plenty of space to shine. His own solos are tasteful constructs that never get too busy, and his best playing is on display when the band is in full flight.

While he can clearly swing or operate in funky environments, Lernis often likes to create "hard to pin down" grooves that defy simple explanation ("Bending Time"). In other places, he relies on deception as a developmental device. "Canvas," which begins with freely executed cymbal rolls moving into an eerie environment and, unexpectedly, turns into an attractive ballad out of nowhere, is the perfect example of how well this tactic can work.

Lernis clearly loves to tamper with the possibilities of a given groove, but the most memorable material on this album is built on consistent rhythmic footings. "Rhythm Portals," which has a funky/earthy feel to it and features Boni's most soulful soloing, proves to be the standout track, and the bluesy closing number—"Feeling Groovy"—is another winner.

While no single piece on this album can define Lernis' artistry, all seven tracks, when viewed as a whole, provide a well-rounded picture of his skills as a composer, drummer and general manipulator of the rhythms and structures that live and evolve within the nature of jazz.

About The George Lernis Jazz Quartet