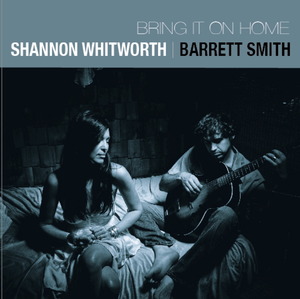 Bring It On Home

Like musical genre, the release of music has become progressively atomized in the past 25 years. Long gone is the ritual ministry of going to a record store to buy and album. Albums, those often painstakingly conceived collections of songs, are gasping their Chain-Stokes last breath at the hands of a generation used to downloading the newest single mp3 recorded in someone's basement using an iPad, the result posted on YouTube. No liner notes, no story, only an effete bunch of too-hip- for-their-own-good writers blogging that this is the new "thing" using the internet as the new word-of-mouth (read that propaganda machine) to decrease the signal-to-noise ratio to just noise.

But, there remains signs of life in the LP, the "album-length" media of the moment. Jazz and classical music may be the only thing between the album and oblivion. That and a good idea. Singers Shannon Whitworth and Barrett Smith, beneath the guise of the Shannon Whitworth Band, did some opening dates for the Tedeschi Trucks Band, revealing a beautifully tranquil and entertaining set of originals and covers readily appealing to those of a certain age (the late Baby Boom). The two touted a new recording they had just made, one devoted to their favorite songs. Now, that is a concept for an album and its title is Bring It On Home.

The single best description of the music Whitworth and Smith make is warm honey infused with opium: both pure and wholesome, while being a bit, how should we say, bohemian. At first blush, this music resembles that of Canada's Cowboy Junkies of the late 1980s, but without the dead seriousness. Relaxed and confident, Whitworth and Smith work their way across an almost 100-year landscape of music that is the crowning achievement of the song writer's craft. They so so with quiet percussion and carefully chosen accompaniment that makes this perfect listening music: appealing to both nostalgia and the appreciation of fine music making.

This disc opens with a spirited reading of Sam Cooke's "Bring It On Home To Me." Whitworth and Barrett have a certain empathy that works on several different levels. They harmonize well together, behind Barrett's "Mr. Postman" Fender Telecaster guitar playing, never too many notes only those necessary, well presented. Okay, that song was circa 1962. The pair jumps back 30 years to the Depression era popular song written by Irving Mills and Eddie DeLange. The song is perfection, until the pair jump ahead 40 years and perform James Taylor's "You Can Close Your Eyes" like it was their own with cellist Melissa Hyman providing that perfect American continuo undercurrent.

From James Taylor to Paul Simon and that composer's introspective "Duncan" from Paul Simon (Columbia Records, 1972). Barrett sings lead and Whitworth provides harmony vocals and a banjo, buoyed by Hyman's cello and Nicky Sander's violin, deriving from this American song all of its Americana. The recording's emotional center is found in the 1927 tango written by Argentinian Julio Cesar Sanders, "I Get Ideas (When We Are Dancing)." Whitworth pours the honey (yes, that same honey) on slow while strumming her ukulele and purring her way through the sexiest lyrics allowable in the Jazz Age.

The disc's apex is the humid and sensual "Corcovado (Quiet Nights)." Whitworth and Barrett divide the vocal duties, with Barrett singing Portuguese and tenor saxophonist Jacob Rodriguez reminding us why Stan Getz was so important. Bring It On Home is that hidden diamond that may be the best recording to cross this desk all year.

Tracks: Bring it On Home To Me; Moonglow; You Can Close Your Eyes; Duncan; I Get Ideas (When We are Dancing); Louise; Sway; Bird on a Wire; Corcovado (Quiet Nights); Green Grass; I'll Be Your Lover Too; You Are My Sunshine.

About Shannon Whitworth and Barrett Smith