By NORMAN WEINSTEIN
June 28, 2007
Sign in to view read count 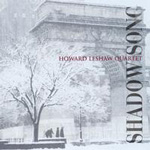 This highly engaging album brings to mind the enduring impact of John Coltrane's legacy in terms of spiritual lyricism.

In the case of Howard Leshaw, whose other band is a spirited klezmer band, Coltrane's spiritually-charged lyricism is mingled, as in the case of Andy Statman's music, with a comprehensive immersion in a variety of sacred and secular Jewish musical styles.

While the indebtedness to Jewish melodies was only obvious in the first of seven Leshaw originals on this disc, "Sayief," there is a prevailing keening and rhythmically daring tone to Leshaw's tenor sax playing that connects directly to his association with klezmer music.

The original compositions are packed with well elaborated solos. Particularly attractive is Leshaw's foray into a kind of deep Jewish blues on "Flower," in which his solo is sensitively supported by the constantly alert rhythm section of pianist Jon Davis, bassist Paul Gabrielson, and drummer Dean Rickard.

Catch this group on their home turf in Brooklyn if you can. There is little doubt that the Coltrane influence of the Atlantic and early Impulse! period will continue to spark surprisingly original directions.