By ROBERT SPENCER
December 1, 1999
Sign in to view read count 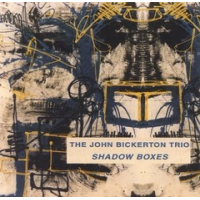 Sometimes an artist doesn't need a big canvas on which to work. Miniatures can be just as artistically exacting and just as pleasing to the audience. John Bickerton is a worker in miniatures: he favors little phrases, not simply repeated but re-aired, re- floated, remade in different conjunctions and combinations. Matthew Heyner (bass) and Rashid Bakr (drums) are his able and willing fellow miniaturists.

That's not to say that this is soft or restrained music, but simply that when Bickerton heats up, his heat comes from the continuity of his lines, not necessarily from the dynamics of his sound. So on "Answers Not Asked," the opening track, the pianist works through a series of chords at a mid-but unfixed tempo, never reaching a conventional climax but building with his own logic. On "Meeting After Dark," the closing track, he tackles a few quieter motifs, working with the pedals and a steady prod from Bakr. Here he allows the phrases to unfold and the tempo and dynamics to pick up a bit more, all the while still quite skillfully limiting most of his activity to a relatively small area.

That makes this music, even at its most percussive, meditative and hypnotic. Fascinating music.